A few weeks ago, I ran a series of posts about the possibilities for friendship for kids and adults with disabilities. I've written about Penny's friendships, I shared a post from Ben Conner about friendship among adolescents, and an exchange between two adult women– Tryn Miller, who has Down syndrome, and her friend Anna Broadway. Today I have the privilege of sharing Jennifer Grant's story of her middle-school age daughter Isabel's longstanding friendship with Sam, who also happens to have Down syndrome. (I should mention that Jen's new book, MOMumental: Lessons in the Messy Art of Raising a Family, just came out. I'm on chapter three and loving her honesty and hopefulness. If you're a Mom who is wondering whether you can make it through, give yourself this book...) 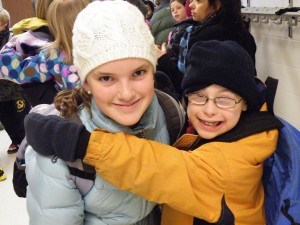 From a young age, my daughter Isabel has seemed determined to keep up with the big kids. Or, to be more precise, I should say she has met the challenge of having two brothers – brothers not much older than herself – with a steely resolve to out-perform them.

She learned to pump on the swings, ride a two-wheeler, and climb all the way across the monkey bars at a much younger age than either of my sons did. When her brother Ian, 18 months older than herself, was in kindergarten, Isabel kept close to us when I read to him or helped him with homework. She'd rush to sound out a word or give the answer to a math problem before he had a chance to do so.

People often mistook her for an older child and asked me if she and Ian were twins.

"Yes, we are," three year-old Isabel would answer, before I had a chance to speak. "We're in kindergarten."

When she started school herself, I wondered whether she would choose other achievers as her buddies and be caught in a metaphorical arm-wrestling match with her friends throughout her school years. (Of course, I hoped she would not.) Early on in elementary school, Isabel came home with stories about the new cast of characters in her life. Kelson and Jenna and Bjorn and Rebe and Sam. Games they'd play at recess. Jokes they told at lunchtime. Who chose her as a partner in gym class.

I noticed that many of the stories she told were about her new friend Sam. When their classroom was assigned a student teacher, Isabel reported that Sam initiated the practice of giving the young woman hugs at the end of the day. "Now we all hug her when we leave," she reported. Another time, she told me that she'd failed a task in P.E. and was "really sad and mad," but felt better when Sam told her it didn't matter and gave her one of his hugs.

When I finally met the famous Sam, I noticed his playful smile and the easy way he and Isabel related with each other. I also noticed that he had Down syndrome. That it was not the first thing she told me when describing her friend, but that Isabel never even considered this a fact worth mentioning was compelling to me.

When I was growing up, the girl who lived next door to us had suffered a closed head injury as a toddler and was cognitively disabled. A boy down the street also had special needs. Both of these kids went to a different school than the rest of the neighborhood and generally kept to themselves. I don't remember them lingering at the end of the driveway on cool, autumn nights when we burned piles of leaves or running around catching fireflies with us in the summer. We didn't see them much.

I do remember feeling uncomfortable when I was with either one of them. When I was a child, no one explained to me why she spoke so slowly and deliberately or why he walked with such a lurching gait. We didn't talk about it. A school bus – yes, the short bus – would arrive, their mothers would walk them to the curb, and off they went.

Over the past few years, I've loved watching Isabel and Sam's friendship grow. Sam lives near to Isabel's best friend and the three of them play together in the summer on Sam's trampoline or at the park across the street from his house. Once, years ago, Sam's parents took Isabel and me aside and thanked my daughter for being kind to Sam. Isabel was puzzled and later remarked, "I don't know why they'd thank me."

"He's shorter," she said with a shrug. "And he wears glasses. And he's never says mean things about other people."

Sam and Isabel are sixth graders now, navigating the ups and downs of middle school. Currently, they're in drama class together and, as ever, anecdotes about Sam are heavily sprinkled in her reports about the school day.

"He's great at doing characters ‘cause he's so funny," she said. "And he projects. We're really supposed to project so people in the back will be able to hear our lines."

Witnessing the way Sam has contributed to my daughter's life, offering acceptance and friendship that isn't based on her performance in school (like whether she can climb that infuriating rope that extends from the gym ceiling) makes me glad that things have changed since the 1970s and that kids who have special needs aren't hidden away in special schools, but are vital parts of their communities.

A few nights ago, after telling another story of their rehearsals of "Into the Woods," Isabel said she was relieved that Sam is in the production with her.

"In middle school, not everyone likes themselves," she said. "Some people are afraid to be themselves. Sometime they tease other people. Sometimes they hurt themselves or they're anorexic. But Sam likes himself."

"When you were little, you told me Sam brings you joy," I reminded her.

Jennifer Grant is the author of two memoirs: Love You More: The Divine Surprise of Adopting My Daughter (Thomas Nelson, 2011) and the recently-released MOMumental: Adventures in the Messy Art of Raising a Family (Worthy Publishing). Find her online at jennifergrant.com.

Down Syndrome; Friendship
May 15, 2012 at 7:12 am
To add a comment you need to be a registered user or Christianity Today subscriber.

Isabel and Sam: Friends without Labels

Isabel and Sam: Friends without Labels