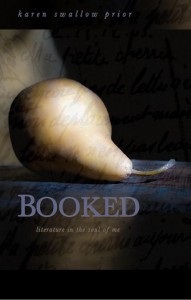 Spoiler alert for all my friends who were English majors in college: I'm buying you Karen Swallow Prior's Booked: Literature in the Soul of Me for Christmas this year. Karen is a fellow contributor to her.meneutics, the Christianity Today women's blog, and she is also the head of the English department at Liberty University. Although her faith comes through in this book, I would recommend it for anyone who loves good literature. This book is part spiritual memoir and part really engaging English class. I asked Karen to contribute an excerpt from my favorite chapter. The excerpt appears below. I hope you'll read it and join me in giving it to many. And if you leave a comment on this post, I will enter you in a drawing to receive a free copy:

...I loved summer, but I loved going back to school, too.

I especially loved getting new school clothes each fall. So I flipped through the new catalog gazing lovingly at each page in the Junior Miss section, playing my regular game of picking out the one thing—just one!—on each page that I liked best. This summer, when I got to the end of the Junior Miss section, I saw another section that I'd never seen before. It was called "Pretty Plus." I wasn't sure what this was, but the clothes looked similar to those I'd seen on the previous pages, if plainer, so I continued looking. The section had only three or four pages, but by the time I got to the end of it, my heart had dropped into my belly. These were clothes for girls my age—but girls of a bigger size. And the more I looked at the models, the more I could not deny what I had recognized right away but didn't want to see: they looked like me. Yes, I was "Pretty Plus," and I was overwhelmed with a sense of shame I'd never felt before.

That was the year I started writing poetry.

It wasn't until many years later—years after reading nursery rhymes, followed by silly limericks, then poems by Robert Frost and Edgar Allan Poe, and then Shakespeare—that I first encountered the poetry of Gerard Manley Hopkins. Hopkins' poetry is odd and beautiful; its beauty, in fact, comes from its strange words, sounds, and images. I think it's fair to say that if it weren't for Hopkins' own sense of not quite fitting in, his poetry would not be so powerful. Like mine, it might never have even been written if not for his pain.

Hopkins, a convert to Roman Catholicism, fought most of his life against the body: against his body, against the body of his poetic works, and against bodily desires he didn't want to have. His body was small, delicately-featured, and often sick; he mistakenly thought that writing poetry would distract him from the spiritual life; and he felt a sexual desire for men, the indulgence of which would be contrary to the teachings of the church.

Shortly after deciding to pursue the priesthood, a refuge, perhaps, against the storm of desires, Hopkins built a bonfire for his poems. Like his passions, the poems burned and then, seemingly, were gone.

It was the church that helped correct Hopkins' errant view that his pursuit of poetry and a religious vocation were incompatible. After burning his poems, he didn't write any more poetry for many years, but sometime after he had taken his vows of poverty, chastity, and obedience as a Jesuit priest, his religious superior asked him to write a poem to commemorate the sinking of a ship which had claimed many lives, including those of several nuns. After doing so, Hopkins began writing poetry again. Yet, the world was not permitted to see these works of beauty and would not until after his death from typhoid fever at age 48. His embrace of poetry was, sadly, awkward still. He fought his poetic desires like he fought his bodily ones. But these are not battles that are always easily won. Sometimes, perhaps, they are not battles that can be won.

In his effort to quell the call of all fleshly desires—and is not poetry, with its sounds, rhythms, and images a kind of fleshly desire?—Hopkins had resisted not only poetry but with it beauty, tied as it is, in most ways of thinking, to the physical world. But beauty—like truth and goodness—will out. Beauty is so powerful that it erupts even in the most unlikely of places. Awkward places, too.

One of Hopkins' loveliest poems is about this kind of beauty, "Pied Beauty." It goes like this:

Glory be to God for dappled things—

For skies of couple-colour as a brinded cow;

For rose-moles all in stipple upon trout that swim;

And áll trades, their gear and tackle and trim.

Whatever is fickle, frecklèd (who knows how?)

Pied means patched or splotchy in color. The title is an oxymoron, for beauty is not traditionally associated with the patched or splotchy things. Or the freckled or big-bellied things. The poem is filled with words and images evoking the beauty of such—things both natural and manmade that aren't smooth, uniform, or even, the qualities traditionally associated with beauty. The poem is a celebration of the awkward things: rose-moles, pieced land, gear and tackle and trim, and brindled cows.

We once had a Boxer of brindle color, rich, honeyed brown streaked with black. A birth defect resulted in the eventual removal of her deformed front leg. We named this awkward, three-legged creature Gracie. She was strong and muscular and loved to drink water right out of the spigot. I would caress the dimpled place where her leg used to be and think about how beautiful she was in her bold asymmetry. I loved her more than I have loved any animal in the world, and more than most people. We used to take her everywhere, and everyone else loved her, too. Often, after seeing Gracie run and play with as much passion and agility as any four-legged pup, people would begin to tell us stories of disability, sometimes their own, sometimes someone else's. They would tell of an accident, or illness, or war scene, all the while scratching Gracie's ears or the scruff of her neck. They would tell of victory and overcoming and joy, too. When Gracie died from a tick borne disease when she was only six, we got a new dog right away to try to fill the hole she left in our lives, but I couldn't stop crying for her for a year.

Gracie's short, irregular life brought unexpected beauty into the world. This is what Hopkins' poem "Pied Beauty" is about. And what it is, too. Not only does its content celebrate the beauty of "all things counter" and "strange," but the form of the poem itself is irregular, from the new words Hopkins creates out of strange combinations ("fathers-forth") to his invented pattern of sound using "sprung rhythm," to the very structure of the poem. The structure mimics a sonnet, but then breaks all the rules of the form, none more dramatically than the abrupt, foreshortened end of the poem with the two sudden words of finality, "Praise him." Praise him, the poems asks—no, commands—for the awkward things: the fickle, the freckled, the big teeth, the three-legged dogs, the girls that act like boys, and those that are "Pretty Plus."  There is, the poem reminds us, a certain kind of beauty that arises only from imperfection—or pain.

(Again, leave a comment on this post and we'll have another book giveaway. Winner announced on Friday, December 7)

UPDATE: Annette, you are the winner of Booked: Literature in the Soul of Me.

Liberty University; Literacy; Prayer and Spirituality; Publications
November 29, 2012 at 5:08 am
To add a comment you need to be a registered user or Christianity Today subscriber.

The Book I'm Giving Away This Christmas (an ...