Home > 2013 > December
Where Abortion and Human Rights Meet: an interview with Bob Fu about China's one-child policy"Forced abortion means it is never a 'choice' for women in China," says activist Bob Fu, author of God's Double Agent: The True Story of a Chinese Christian's Fight for Freedom in an interview about the government's one-child policy. Amy Julia Becker
expand 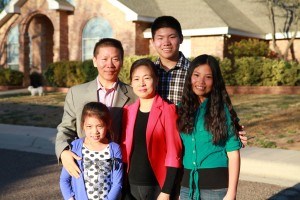 I appreciated Bob Fu's story, as recounted in God's Double Agent: The True Story of a Chinese Christian's Fight for Freedom, for a number of reasons, including the glimpse at recent Chinese history and the story of an unlikely conversion to Christianity. But I was most struck by his account of the grievous human rights situation related to the one-child policy. Women in China are forced to have abortions (many of them late-term) not only if they are bearing a second child but even if their first child was conceived without state permission. In fact, the reason Bob is in America today is because he and his wife needed to escape because she was illegally pregnant. Can I just repeat that last phrase? "Illegally pregnant."

Again, I commend God's Secret Agent to you for many reasons, but I asked Bob if I could interview him about the current situation in China as it relates to forced abortion. Our conversation went like this:

Your book begins with your wife's and your dramatic escape from China. You both had already endured months of brutal conditions in jail, and you were both willing to suffer as a result of your faith. Can you explain why you had to leave the country with such urgency?

My wife was pregnant without a "birth permit" and she could face a forced abortion if she was caught. We also learned we would be re-arrested because of non-cooperation" with security forces.

From a historical perspective, what led to the government's one child policy? How did most Chinese people respond?

On November 11, 2013 Chinese government mouthpiece Xinhua News published a report entitled "State Health and Family Planning Commission: 40 Plus Years of Birth Planning Policy, 400 million population were prevented from birth in our country." It is called a "state basic policy." No one can and is allowed to challenge it, so most Chinese people chose to obey or face harsh penalty and extreme punishment if a couple disobey by having an extra pregnancy without permit.

What happens if a woman gets pregnant with a second child or with an unplanned pregnancy?

A few weeks ago China announced a small change by loosening the "one child per couple" policy. The loosening of "one-child" policy is a small positive baby step. The CCP sees a major economic social and security disaster coming upon if it continues the current policy. It only allows the second child  if one of the parents is the only child in his or her family. It still says clearly China will continue to carry out family/birth planning state policy. So the whole coercive system remains unchanged. As long as this policy is still held, millions of women and men will continue to suffer under the cruel family planning system with forced abortion and forced sterilization.

The government does not endorse sex selection. It is part of Chinese traditional and culture.

What effect do the rampant forced abortions have on the culture in China? How has it affected the family?

It has created a culture of disrespect to life and dignity with millions of babies (some up to 9 months) forcefully aborted. It has created generations of "little emperors" who are self centered only. It makes China become an international hub for women trafficking because of gender imbalance and it also makes Chinese women's suicide rate the highest in the world. Millions of men and women's health were destroyed because of going through forced sterilization and forced abortion.

Why has there not been a more vocal outcry from the international community against China's human rights abuses, and forced abortion in particular?

The western liberal ideology choose to ignore it because they believe the Chinese government's argument. The government's atheistic worldview forms its premise for family planning policy which claims too many people will create poverty. The women's rights organizations choose to ignore it because the word "abortion" doesn't fit the political correctness against the "pro-life" category from their so called "pro-choice" standpoint although forced abortion means it  is never a "choice" for women in China. The pro-lifers in the west are busy on domestic issues of the day. And the Chinese Christians and other religious minorities are silent because of fear.

Does concern over abortion come from a uniquely Christian perspective, or is it shared by non-Christians in China?

It is shared by all kinds of groups in China because its is carried out by violence and torture against women and men alike.

What can people in the United States do to protest this policy or to support women who want to keep their babies?

You can urge the top leaders to speak up directly about their opposition against forced abortion and sterilization in China to Chinese leaders. Urge the abolition of the family planning policy in China. Help the victims and encourage women by providing incentives and support for baby girls to be born.

Bob (Xiqiu) Fu is one of the leading voices in the world for the persecuted church in China. He was born and raised in mainland China and graduated from School of International Relations of People's (Renmin) University in Beijing. He later taught English to Communist Party officials. He pastored a house church in Beijing until he and his wife were jailed for two months for "illegal evangelism" in 1996. Bob and his wife, Heidi, fled to the United States as religious refugees in 1997. Bob founded the China Aid Association (CAA) in order to draw international attention to China's gross human rights violations against house church Christians. Bob is a Research PHD candidate at Durham University, UK.  He and Heidi have three children, Daniel, Tracy, and Melissa.

Abortion; China; International; Persecution
December 02, 2013 at 10:11 am
To add a comment you need to be a registered user or Christianity Today subscriber.

Where Abortion and Human Rights Meet: an interview with Bob Fu about China's one-child policy

Where Abortion and Human Rights Meet: an interview ...