Home > 2013 > September
Will and Kate Help the World Imagine Possibilities for People with Down SyndromeWhy it matters that Will and Kate accepted a painting by a woman with Down syndrome for their son's nursery.Amy Julia Becker
expand 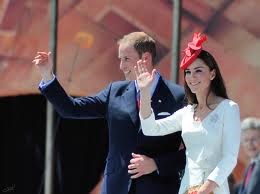 After Penny was born, people kept telling me about the "amazing" things people with Down syndrome could do. A part of me liked hearing the stories–of men and women who started businesses, completed serious athletic feats, sang in choirs, played instruments, and so forth. A part of me felt uneasy about those accomplishments both because many of these "amazing" things seemed quite typical, so what was the big deal, and because the really amazing ones were unlikely for anyone else with Down syndrome, so what was the point of hearing about it? When I was told about a friend of a friend whose daughter with Down syndrome was an artist who made greeting cards, I was a little skeptical. What if the cards were simplistic or unattractive? What if I thought they were bad?

But then the cards arrived, and they were lovely watercolors of flowers and birds. They didn't belong on a museum's walls, but they could have held their own in a gift shop. I kept one propped on the mantel for months. It was a reminder to me that people with Down syndrome have particular gifts and abilities, a reminder that Penny one day would have something to offer the world around her, even if it wasn't in the form of a painting.

When I read the news last week that the royal couple, aka Kate and Will, had decided to accept a painting for their son's nursery by an artist with Down syndrome, I had that same initial twinge of skepticism (or should I call it cynicism?). The Huffington Post headline reads Will and Kate Fight Stigma Against Down Syndrome in a Beautiful Way. The article doesn't explain why they accepted the gift, but it does explain that a 43-year old woman with Down syndrome worked for six months on a painting, and that the royal couple accepted it for George's room. It also shows the painting, a colorful, whimsical, fabulous children's scene:

Either way, I'm inclined to think that this gesture doesn't so much fight stigma as it opens up the imagination. 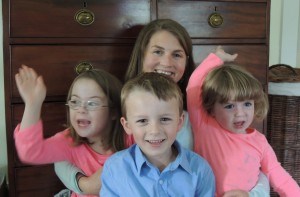 Most people with Down syndrome will never paint a painting with the richness and playfulness of this one. Most typically developing folks won't either. But for anyone who already has an impression of Down syndrome, this painting, and the woman who carefully rendered it, represent possibilities, possibilities for parents and for our culture to imagine individuals with Down syndrome as ones who can contribute in a meaningful way, whether in the realm of arts or athletics or simply through their relationships with others.

That greeting card on my mantel all those years ago didn't tell me anything specific about what my daughter would one day be able to do. It just told me that she would be her own person, with her own needs and her own gifts. It reminded me that my job as her mom was to help her discover who she has been created to be, to help her discover her particular abilities even as I support and care for her in her particular areas of weakness and need. That greeting card helped me imagine a beautiful future for Penny. I hope this painting hanging in George's nursery will help countless others imagine a good future for people with Down syndrome across the globe.

Down Syndrome
September 16, 2013 at 9:13 am
To add a comment you need to be a registered user or Christianity Today subscriber.

Will and Kate Help the World Imagine Possibilities ...