Home > 2014 > December
A White Cop and a Black LadyTalking After Ferguson, Hands Down, a guest post by Patricia RaybonAmy Julia Becker 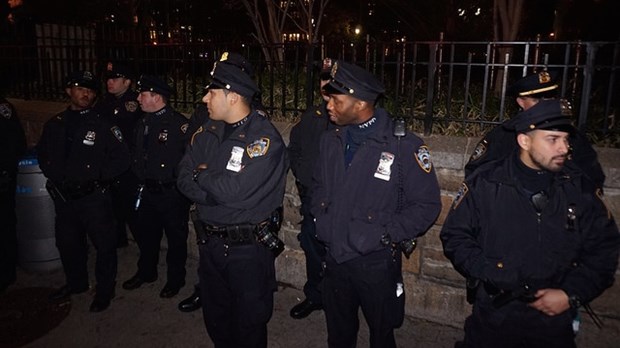 Image: The All-Nite Images/Flickr
Police at a protest after a Grand Jury decided not to indict Darren Wilson
expand

First I noticed his kilt. A man in a skirt.

Then I learned he was a police officer. A California motorcycle cop. So this white man stood out for certain at a platform-building conference we both were attending in mid-November in Colorado Springs.

Then Jason Hoschouer, the man in the skirt, spoke the words that changed both of our lives.

“Cops only trust other cops,” he said. Not words that build bridges. Not words that move blacks and whites beyond Ferguson. Not words that help white cops and black citizens drop our guard and forge a bright future. Not even if both are Christians. (And we both are.)

Hoschouer wasn’t speaking of Ferguson anyway. Surely he wasn’t speaking of Christ. At this marketing conference, he was commenting in an early-bird session about his after-hours business. It’s a personal finance service for other officers, whose job stress, according to Hoschouer, prompts many to overspend to a fault.

Stressed out and maxed out, officers turn to him for financial coaching, he said, even though he’s not a financial adviser. Explaining why, Hoschouer casually remarked: “Cops only trust other cops.”

My attention froze. Cops only trust other cops?

I shook my head and caught the eye of another Black woman in the session. She and I had just met during the refreshment break. But at Hoschouer’s words, we gave each other the look. Without saying one word, both of us knew what each other was thinking: that Ferguson is still in the news and Michael Brown is still unavenged and a grand jury probably won’t indict the white officer who shot him—and many white Americans won’t see why that’s a problem. And, if that’s not enough, cops only trust other cops.

Really? In a fancy hotel at a high-ticket conference, would this truth of Black life—that our lives don’t matter and are suspect, and our concerns often misunderstood--challenge the two of us even here?

Jesus told me yes. Let it seize your attention. Let it disrupt your conference. Let it force you to call on me, in hopes you can try to listen. To dare, indeed, to seek to hear, not on your own understanding. On mine.

So that’s what I did. I asked the Lord to help me—to consider the view of a man I didn’t know, couldn’t understand and had no way to reach.

Is that a prayer? Help me, Jesus, talk to a white man wearing a skirt? Who doesn’t trust me because I’m not a cop?

Well, Jesus said, yes. That is a prayer, indeed.

So on final night of the conference, I saw the skirt-wearing cop again. (He’d worn the kilt to stand out.) We were in a Colorado Springs hotel, however, and the weather had turned frigid. Outside it was snowing. The white officer had exchanged his skirt for long pants. Recognizing him anyway, I waved a hello as he walked to a table.

And with my few words, the ground shifted. With God’s grace, that is, I could ask:

Can we really talk? Can I really listen? Will you really hear? Can we stay around long enough to find out?

To answer, Hoschouer sat down at my round table. My husband, who had joined me that evening, pulled in close, too.

“What did you mean exactly?” I asked Hoschouer. “When you said cops only trust cops, what were you talking about? And what does that mean?”

I told him why I was asking: Ferguson. Michael Brown Jr. Racial tension in America.

“If cops only trust other cops, where does that leave us all?”

He nodded. Listened to me. Answered. Not to my satisfaction. We are miles apart on how we see the world. (One look at his MotorCop blog will confirm that.) In fact, he immediately brought up the du jour argument that “more blacks kill blacks.” So I retorted: “And more whites kill whites.” (As Michael Eric Dyson, tongue in cheek, says, “If you want integrated killing you have to have integrated communities.”)

Frustrated, I drew up my chair to explain—that the Michael Brown issue in Ferguson is excessive force. By police. The same people charged to protect and serve. “Getting killed by police is what protesters are angry about.”

Meantime, this motorcop’s concern? “My job is dangerous,” he said. “In training, that’s the key thing we hear: Get home alive.”

The best conversation ever? No. Yet we were talking. On neutral ground. A white cop. A black lady. That’s how Hoschouer described me in a blog post he wrote the next weekend for Uniform Stories, a blog by law enforcement officers.

More important, he called for more talking like ours: “The key is to find representatives on both sides that are mature enough to leave their talking points at home and come to the table with an open mind, open heart, and the ability to listen. “Honestly, I wish my community was closer to hers because I would be honored to speak with her again,” he wrote.

In fact, he and I met by Skype on video last Saturday morning— taping the conversation to share. No agenda. Just two Americans. Hands down.

I’m praying we’ll talk again, perhaps inspiring others to also try walking “across the aisle.” For certain, whatever ground we covered transpired for three reasons. One, he wasn’t wearing a weapon. (Just that skirt.) Two, I wasn’t in his face. Three, Jesus opened the door.

Will we walk through? The Lord’s way? Hard-working clergy in Ferguson keep saying that’s the key. We need your prayers. Will you pray? We nod yes. Then we get back to our fussing and fighting. To our blaming and bluster. To our ways. Not God’s.

On a snowy night in a Colorado hotel, without weapons or wiles, a white cop and a black lady relied instead on the simple Christ way of agape love. No, not in name. I didn’t wave a Jesus flag. He didn’t either. But when we act like Christ, things change.

Patricia Raybon is the award-winning author of My First White Friend, her racial forgiveness memoir which won a Christopher Award. Her upcoming book, releasing April 2015 from Thomas Nelson’s W Publishing Group, is Undivided: A Muslim Daughter, Her Christian Mother, Their Path to Peace. Learn more at PatriciaRaybon.Com

Racism; Reconciliation
December 02, 2014 at 8:44 am
To add a comment you need to be a registered user or Christianity Today subscriber.

A White Cop and a Black Lady

A White Cop and a Black Lady