Home > 2014 > February
What House of Cards, Breaking Bad, and Mad Men Get Right (and what they don't get)Our belovedness is more true than our sinfulnessAmy Julia Becker 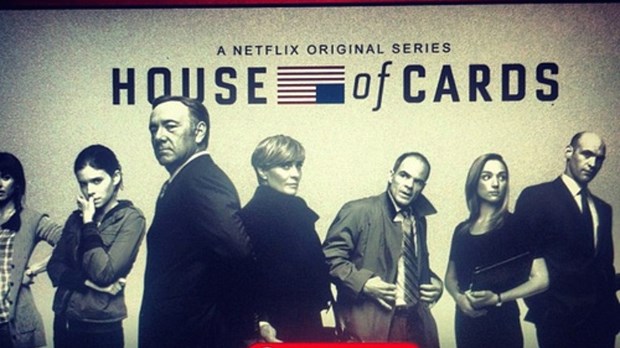 Alessandra Stanley of the New York Times describes Netflix's House of Cards "the most joyless show on television." My husband and I have settled right in. I'm intrigued by the storyline—a powerful Congressman (Kevin Spacey) who becomes Vice President by hook and by crook and by very deft maneuvering, aided by his equally power-hungry and ruthless wife (Robin Wright). I'm compelled by the good acting. But I'm not sure I'm going to make it through. House of Cards is dark. Greed, power, sex, murder, drugs, hatred. That kind of dark.

I've felt the same way during past seasons of AMC's Mad Men, with Don Draper's serial betrayals and the sad and (as far as I can tell) hopeless backstory of his childhood. I took a break from AMC's Breaking Bad too. The story of the chemistry teacher turned meth king, and all the ensuing death that results, just got to be too much, at least for a while.

But I keep going back to these shows. In part because I believe these dramas, with their complex plots, adult themes, character development, and social commentary comprise a new art form. One hundred years from now, I think people will be watching some of these shows in the same way we now read Dickens and Melville. But the truth contained in these shows also draws me to them.

House of Cards, Mad Men, and Breaking Bad all constitute contemporary meditations on the concept of sin, and they manage to contain deep theological truth without becoming simplistic morality tales. Breaking Bad's creator, Vince Gilligan, reflects upon the show: "If there's a larger lesson to 'Breaking Bad' it's that actions have consequences . . ." He goes on to quote his girlfriend when he says, "I want to believe there's a heaven. But I can't not believe that there's a hell." (See also David Zahl's insightful article about the morality of Breaking Bad in CT Magazine for more on this theme.)

Similarly, Mad Men and House of Cards often feel as though the characters inhabit hell on earth. Mad Men, set in a 1960's ad agency, is full of glitz and glamour, but the glitz and glamour only serves to demonstrate how deep the pain runs for these characters underneath the surface pizazz. House of Cards traces the story of a man and woman climbing the ladder of success and achieving everything they have ever dreamed of, but melancholy that borders on despair accompanies every powerful move.

Christians tell a story about human nature that includes the sin portrayed in these shows. And yet our story of human nature begins and ends with love, not with evil. It begins with a God who creates human beings for relationships that are healthy and whole and free and good. Moreover, our story ends with sin washed away and love that remains forevermore.

As much as I appreciate each of these shows, and although I will continue to watch them, all of them fall short in their attempt to comment truthfully upon human nature. Yes, humans are sinful. We do evil things. Even the most benign among us have the capacity for acts of terror and vengeance and apathetic injustice. And yet what is more true, what runs deeper still than our sin, is our belovedness. And none of these shows get that.

Pop Culture; Sin; Television
February 27, 2014 at 12:42 pm
To add a comment you need to be a registered user or Christianity Today subscriber.

What House of Cards, Breaking Bad, and Mad Men Get Right (and what they don't get)

What House of Cards, Breaking Bad, and Mad Men Get ...