Home > 2015 > April
When My Son with Autism Didn't Drop the BallWhat one night at lacrosse practice showed me about who he is becoming. Sarah Parshall Perry, guest writer 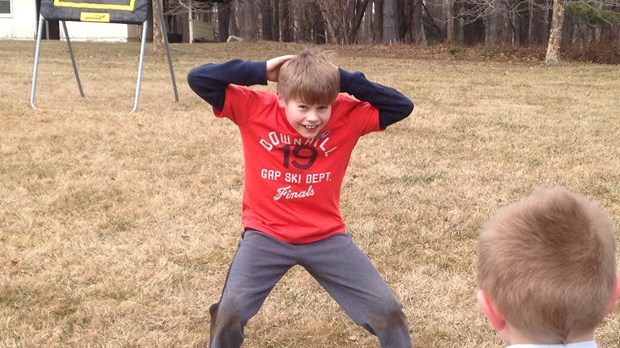 April is my bittersweet month, when the world turns blue for autism awareness, when it’s more conscious of the thing that is my constant companion. But after April, the world sometimes forgets.

When he was little, our neurologist commended us for being proactive in seeking Noah’s Asperger’s Diagnosis. Strange, I thought. As if we could wait, when Noah was flapping, refusing eye contact, and fixating; as if other parents would have missed it. But they do. Parents miss things. We are so fallible. We are busted and time-weary and inexperienced. Sometimes we don’t see things until later, when a child on the spectrum stands out among his peers like a road flare in the dark.

Tuesday was the first lacrosse practice of the year for Noah. Lacrosse requires a hand-eye coordination that’s so hard for him. He’s also started with a new league, where he knows neither the coaches nor the players. On this night, my husband was traveling and I had neglected to ensure my son had all required equipment. Being only passingly familiar with lacrosse, I eyeballed his gloves, helmet, and stick and thought we were covered.

We were missing Noah’s pads, his jersey, and a pair of shorts. He was going to have to practice in sweatpants, indoors. This would be unremarkable, save for the fact that he was also wearing a long-sleeved shirt, and Noah sweats like a hog in July. What’s more? We’d forgotten his sports bottle. I had visions of Noah’s heat-stroking, unprotected body being pelted by balls as he begged the coach for water.

The only thing “right” that night was the fact that we were punctual, and had just enough time to approach the coach – the one we’d never met – and confess our shame.

To his credit, my son is as bold as he is garrulous. Noah marched up to the coach, grabbed his sleeve and loudly asked:

“Excuse me, sir. Where are the pads kept?”

The coached looked at Noah, then up at me, standing behind him.

“The pads, son? Well, you should have those already. Did you forget them?”

(I screamed a bunch of profanity in my head.)

This wasn’t entirely true. Noah had already played one season with another team. They had to be somewhere in the house.

“Never?” The coach was unconvinced. “Did your mom forget them? Or did you?”

Noah kept on barreling. I braced for impact, expecting him to throw me under the bus. I was, after all, the responsible grown-up, the one who is supposed to double-check things like equipment, the one who ought to know we have 100 other things we could be doing on a school night if we weren’t going to get it together for lacrosse practice.

“No--I mean, yes, sir. I must have forgotten them. But what should I do? Because the practice is beginning, and I don’t have pads, or a jersey, and I don’t know--”

“Listen,” the coach barked, “we’ll work with what we got.” He turned toward the arena.

Noah handed me his jacket.

“Okay buddy,” I gulped. “Did you forget your pads?”

“If I have them, I can’t remember where they are.”

“Alright. Well, we’ll look later. Let’s just get you in there.”

And in he went, visible to me and everyone in space in his fluorescent green shirt.

Awesome. Like he wasn’t already going to stand out enough.

The kids parried, tossed balls, and lined up for drills. They chatted and high-fived. And my Noah stood in the middle – the honest-to-God-middle of the arena – and awaited instruction, shifting an imaginary weight on his right shoulder, the newest of his tics.

I took a seat in the upstairs viewing box, slipping in among the throng of other parents. I thanked God for my vantage point and anonymity.

As practice started, it became clear which players were the strongest. Noah, though the oldest, was among the least skilled. I watched him in the drills, the stretching and sprints. I watched him pass to other boys and take his turn at shooting goals. “Please Lord,” I prayed again, “let the routine of practice comfort my son who is calmed by predictability.”

But by the end of the first half, Noah was lining up first. He was the first to volunteer. No one talked to him, and he talked to no one, but when they ran sprints, Noah’s pace was breathtaking. His effort stunned me. Which is then that I realized Noah had not actually dropped the ball at practice.

Yes, my son should have remembered the things he needed. Like every parent, we’re trying to build accountability in our kids. But even simple requests, after long days full of complicated instructions, can be challenging for children to follow. I don’t use this as an excuse, but merely to say that I didn’t give Noah the tools he needed to function at his best.

But more importantly, I’d dropped the ball in thinking the night was doomed, with my inner critic whispering we ought to just leave. Noah didn’t care that he was missing equipment, or overdressed, or an outsider. He didn’t mind he was different. Noah was content to give the best possible effort with what he had. This, I think, is the most we can wish for our children in whatever they do – to work at it with their whole hearts (Col. 3:23).

Noah dropped lots of balls that night. But not the ones that mattered.

We joked on the way home about the night’s awful start. I spoke tentatively, afraid to face Noah’s blame because I’d let him down. But he showed me God’s perfect love, the kind that drives out fear (1 John 4:18). He took my hand and held it lightly, as he does only when it’s dark and no one sees. He told me he loved me, and promised to take better care of his equipment. I laughed.

“I promise to take better care of you.” Sarah Parshall Perry is the author of Sand in My Sandwich (And Other Motherhood Messes I’m learning to Love) (Revell, 2015), writes on family and disability for various outlets, and lives in Maryland with her husband and three children, two of whom are on the autism spectrum.

Autism; Disability; Parenting
April 27, 2015 at 12:20 pm
To add a comment you need to be a registered user or Christianity Today subscriber.

When My Son with Autism Didn't Drop the Ball

When My Son with Autism Didn't Drop the Ball