How two dying patients dealt with a new right: When to die.
Christine J. Gardner in Portland and Coos BayJune 14, 1999
This article is from the June 14 1999 issue. Subscribers can read all of CT's digital archives.

Troy Thompson's future was coming into full focus. Marilyn, Thompson's tall, blond wife of 15 months, had just given birth to their daughter, Victoria. With three other daughters from their previous marriages, family life was satisfying and happy. Work brought fulfillment, too. As a landscape designer in Salem, Oregon, Thompson, 32, enjoyed bringing beauty to life. The Thompsons had recently purchased land on a hill overlooking the lush Willamette Valley in Newberg, a bedroom community of Portland. Their life's dream, including plans for a new house, seemed almost complete.

In 1993, a month after Victoria's birth, Thompson's life took an unexpected turn when he came home from work with a dull pain in his upper back. Strained muscles were nothing new for the six-foot-four outdoor enthusiast. But this time the muscle began to twitch in an unfamiliar way.

First, Thompson went to a physical therapist who, in May 1994, then sent him to a neurologist. He put Thompson through a battery of tests that included blood work and an MRI. Two weeks later, the neurologist had ruled out every possible cause except amyotrophic lateral sclerosis (ALS, also known as Lou Gehrig's disease). He referred the Thompsons to neurologist Wendy Johnston, Portland's top ALS specialist, at the Oregon Health Sciences University.

The Thompsons assumed Johnston would conduct more medical tests. They did not realize that the referral was, in fact, a diagnosis. Later that day, the Thompsons' family doctor called to express condolences upon hearing the news. The referring neurologist had been more candid with the family doctor than with the patient. Marilyn Thompson broke down in tears. "It was so sudden and so devastating. We weren't ready to believe it." 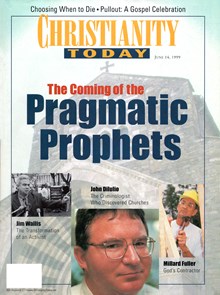 This article is from the June 14, 1999 print issue. Subscribe to continue reading.