In 2001, Western and Eastern Christian churches will celebrate Easter on the same date: a rare occurrence, because East and West calculate the equinox and full moon using different points of reference from the Earth. Because of this, report the news services of both the Greek Orthodox Archdiocese and the Evangelical Lutheran Church in America, "there is a renewed effort for all Christians to use the same calculations to determine the date of Easter each year." The suggestion on the table is to use "precise modern astronomical determinations from the meridian of Jerusalem—the place of Christ's death and resurrection—so neither tradition will have to change its policies."

Kudos to Taco Bell for publicly recognizing Lent, one of the oldest observations in the Christian calendar. But its latest ad campaign, "Lent Has Never Tasted So Good," misses the point. "Lent doesn't mean 40 days of fish sticks," reads its current flier. "You can satisfy your craving with a Taco Bell® meatless sensation like our Bean Burrito, 7 Layer Burrito, Tostada, Nachos & Cheese, Pintos & Cheese or side order of Rice. At Taco Bell® Lent doesn't mean giving up on taste." Uh, maybe not at Taco Bell®, but isn't giving up on tasting the foods you crave the definition of fasting?

Bob Jones III is angry that the press, including his local Greenville News and The Associated Press, reported that the school's Web site " no longer equates Catholicism with cultism." "In order to leave no doubt in anyone's mind of the university's integrity and absolute commitment to its biblical principles, the article in question has been reposted," Jones says. ... 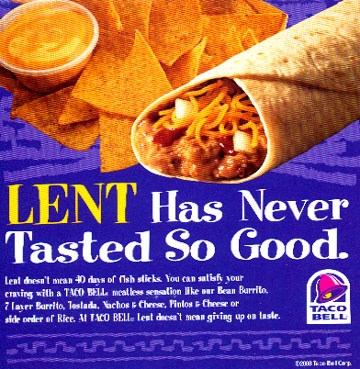