New York-based ad executive Darrin Hill (Cuba Gooding, Jr.) returns to his southern hometown after his Aunt Sally dies, leaving him an inheritance with a condition: In order to collect it, Darrin must revive the local church choir in time for the annual Gospel Explosion competition. At first, the task seems easy enough-before Darrin realizes he's got to assemble the choir from a less-than-promising talent pool, fight a legalistic member's attempts to foil him, and convince an attractive nightclub singer-his childhood crush Lilly (Beyoncé Knowles)—to join.

This pleasant but predictable comedy (think Sister Act or Sister Act II in a different setting and with less suspense) features a cast of well-known gospel and R&B artists, including Shirley Caesar, Ann Nesby, Angie Stone, Eddie Levert, the O'Jays, and rapper T-Bone. (Special features on the DVD include extended musical performances and extended/deleted scenes.)

The lead performances here are less than convincing, with Gooding's exaggerated facial expressions and Tae-Bo-styled choir directing becoming a bit wearing at points. Still, his comedic timing and innocent, deadpan delivery are enjoyable. Knowles is soft but moderately believable as the burned-woman single parent who opens her heart to Gooding's lovable liar.

The major problem with The Fighting Temptations is that it's not completely clear what writer Elizabeth Hunter and director Jonathan Lynn want the viewer to take away from the film. There are several potential messages here—about telling the truth, about having faith, about the value of church, family and community, about redemption—but none of them are fleshed out well enough to provide more than a warm, agreeable feeling about … ...

Join in on Facebook
Tags:
None
Posted:
September 19, 2003
More From: LaTonya Taylor 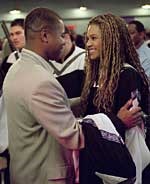