The author of A Walk to Remember has another novel coming to the big screen: The Notebook, a beautiful love story opening next week.
by Mark Moring |June 18, 2004

The Notebook, a beautiful love story coming to theaters June 25, is based on Nicholas Sparks' novel by the same title. The film stars James Garner as Noah Calhoun, an elderly man who reads from a faded notebook to Allie, an old woman with Alzheimer's disease (Gena Rowlands). Noah's readings spark Allie's fading memory to relive her youth—and an unending love they once shared. Sparks, a best-selling author, has already seen several of his previous novels adapted to the big screen, including 2002's A Walk to Remember, which was embraced by many Christians. Sparks, 38, who lives in North Carolina with his wife Catherine and their five children, says The Notebook was inspired by his wife's grandparents, and their great love for each other. A fitness nut who runs 30 miles a week and has a black belt in Tae Kwon Do, Sparks recently talked to us about his book and the upcoming film.

What did you think of the film?

Nicholas Sparks: I thought it was wonderful, a very close adaptation to my novel. This is the third novel that I've had adapted into film, and I thought that of the three this stayed truest to the story that was within the novel. I was very flattered.

How much control did you have over the story and the movie script?

Sparks: None. When you sell your story, you waive everything, you cede total rights. So they could take the book, change the title, change all the characters, change the entire story. That is completely up to the studio.

And you're willing to give that up?

Sparks: You have to. I mean, there are no book sales to studios that don't have that clause unless you are J. K. Rowling or John Grisham or Michael Crichton. They might be able to put their foot down and say I'll only sell this if … But not me.

Your wife's grandparents inspired this story. What impressed you about them? 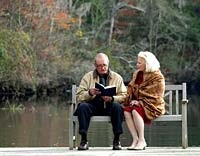 James Garner and Gena Rowlands in The Notebook

Sparks: The depth of their love for each other after 60 years of marriage. My wife was very close to these grandparents, who only lived about 40 minutes away. But they couldn't make it to our wedding because of health issues. So, the day after our wedding, we wake up and my wife says, "Do you love me?" And I'm like, "Of course I love you." And she says, "Good. Then do something for me." She told me to put on my tux, and she slipped back into her wedding dress. And we went and visited her grandparents and took pictures. That's when they told us their story—how they met as kids and then got separated, then she got engaged to someone else, then she comes back and she realizes she loved him, they get married. But just the way they were sitting together and holding hands, I remember thinking that it was amazing to me that after 60 years of marriage these two were treating each other the same as my wife and I after 12 hours of marriage. Just a wonderful thought. So when I wrote The Notebook, that's what it was about—two people who literally loved each other from the moment they first laid eyes on each other, all the way through to the end of their lives.

Many Christians embraced A Walk To Remember. Did that surprise you?

Sparks: That book was inspired by my sister, who died of cancer in 2000 at the age of 33. Why did Christians like it? I have certain moral parameters that I do not cross in writing; I don't write about adultery or kids having premarital sex. I don't know whether evangelicals embraced it for that reason or not.

How would you describe your own faith?

Sparks: I'm Catholic, and my wife is Catholic. We're very religious. We go to church. We pray every night. We pray at dinner. To me, Catholics regard themselves as very Christian. Some Christians view Catholics as not necessarily Christian. But to us it's much closer.

Does your faith inform your writing?

Sparks: Absolutely. Without a doubt. I do not use profanity in my novels. My characters all go to church. My characters have drawn great strength from church. For instance, in my last novel, The Wedding, he credits his wife with showing him that Christ is his Savior. And he says, "This is the greatest gift." I try and work these elements into my novels, some more so than others.

A Walk To Remember was very strong in that, and The Wedding was strong in that. And my new non-fiction book is strong in that. It's called Three Weeks with My Brother, based on a trip around the world that my brother and I took together. My brother had been struggling with his faith and his belief in God and Christ. This is the story of his journey. And it's sort of the memoir of our lives, dealing with my brother's struggle with his faith and my own struggles with working too much. So, I work my faith in as much as I can within the context of my stories.

How does faith play out in The Notebook?

Sparks: It's a metaphor of God's love for us all. The theme is everlasting, unconditional love. It also goes into the sanctity of marriage and the beauty you can find in a loving relationship.

Do you think the film captures that faith angle well?

Sparks: Yes, but I don't want to mislead anyone who thinks these characters are without flaw. They're in love. Crazy things sometimes happen. Do you get my drift? I can't say that everything in the story is completely and a hundred percent Christian. But these are human characters. Nobody is perfect, period. And that's the way the world works. And all we can do is do our best and accept Christ and live your life in as Christian a manner as you can. And you're going to fail at times.

Is it obvious in the film that it's a metaphor for God's unconditional love?

Sparks: It's very subtle. Spreading the news is your duty as a Christian, and there are many ways to do this. There are those who are so wonderful from the pulpit and so telegenic—your Billy Grahams and your Robert Schullers. Others do it through literature, very God-based literature—like Rick Warren. Others do it through the examples that they lead—like Mother Teresa. Others do it more subtle, and that's where I would go.

With three of your novels now on film, does that affect the way you write? Do you ever write while thinking, I wonder how this will play out on celluloid?

So, you were once named Sexiest Author Alive by People magazine, eh?

Sparks: That is far from my greatest achievement. When you get picked for something like that, you giggle about it. You kind of giggle and then you move on.

How many times did your wife vote in that poll?

So what did she say when that issue of People came out?

Sparks: She said, "You??" She giggled about it, and that was it. And really it was forgotten by the next day.

For more on Nicholas Sparks, visit his official website.