French director—and music lover—Christophe Barratier helmed his country's No. 1 movie last year, Les Choristes. Now that it's coming to the U.S., we chatted with Barratier about his film.
Interview by Mark Moring |January 11, 2005

Last year's No. 1 film in France was about an immensely talented young teen at a boarding school that resembles an old castle—and where scary and magical things often take place. Harry Potter and the Prisoner of Azkaban? Nope, that was No. 2 at the French box office. Tops on the list was Les Choristes, a poignant story set in 1949, about a school for troubled boys and where hope is in short supply. But in walks a new teacher, Clement Mathieu, who works his bit of "magic"—by forming a choir and teaching the boys to sing, bringing joy and light to a place of darkness and despair. And the whiz kid? A boy named Morhange who has a bad attitude—and an angelic voice. Which will win out in the end? Will his rebellious spirit take him down a dark path, or will his musical gifts take him to better places?

The man behind the film—which opens in limited release this Friday—is 41-year-old director Christophe Barratier, who grew up in a theatrical family but ultimately ended up as a professional musician, playing classical guitar. He ended up disillusioned with music, and turned to film—and in Les Choristes, he brings both passions together.

Barratier says he was inspired by a little-known 1945 French film, The Cage of the Nightingales, about a young teacher who starts a choral group in a home for delinquent boys. Barratier says the "combination of music and childhood" drew him to that film, from which he says "two main things stayed with me: the emotion produced by the children's voices, and the inspiration of a failed musician who tries, in spite of everything, to transform the world around him. All the films I like have this in common: they are all about how one individual can make the world more livable." ... 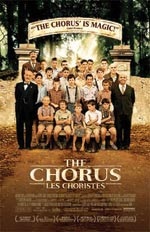