Daniel Johnston, whose songs have been covered by everyone from Beck to Wilco, has battled his inner demons for years. Just ask the filmmaker who documented his life story.
by Mark Moring |April 11, 2006

As a longtime fan of Daniel Johnston's quirky music, filmmaker Jeff Feuerzeig thought it fitting to make a documentary about the brilliant-but-troubled musician.

The Devil and Daniel Johnston is an apt title for Feuerzeig's film, depicting the wild roller coaster ride of an artist with bipolar disorder who has often battled his inner demons—sometimes quite literally.

Johnston, now 45, is a self-professed Christian who acknowledges Satan's presence and the reality of spiritual warfare, though his mental illness at times twisted those truths into bizarre manifestations that haunt him and his art—his music and his drawings. Today, Johnston lives with his parents, both in their 80s, who worry about what will happen to him after they die.

The documentary is an honest glimpse into the sometimes strange, often disturbed, and always churning mind of a creative wunderkind whose music has been covered by Pearl Jam, Zwan, Beck, and Wilco, and whose fans include Johnny Depp, David Bowie, Simpsons creator Matt Groening—and Jeff Feuerzeig.

Feuerzeig won Best Director at Sundance last year for The Devil and Daniel Johnston, which took more than four years to make. Much of that time was spent transcribing hundreds of audio cassettes on which Johnson documented much of his life—from his teenage arguments with his mom, to his undying love for a girl who never returned it, to his delusions that he was Casper the Friendly Ghost. Snippets from those tapes are played throughout the film, giving the viewer unprecedented "access" to the mind of a genius at work—sometimes in the surge of creativity, sometimes in the midst of a meltdown.

It's a fascinating portrait of a tormented-yet-gentle soul, and a project that Feuerzeig ... 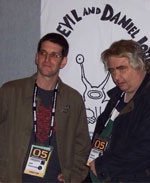