Retired NFL coach Dick Vermeil is known for turning around struggling football programs, inspiring his teams, and leading the St. Louis Rams to Super Bowl victory in 2000. But he's maybe best known for crying a lot. He's an emotional, big-hearted guy who, moved by the thrills and agony of the game, tears up on the sidelines, in press conferences, in locker rooms. Knowing that, I was sort of surprised that Vermeil's character in the true-life football drama Invincible doesn't tear up once.

But I wasn't surprised that I did. A couple of times. Invincible is the latest in Disney's heartwarming line of true sports stories like Remember the Titans, Glory Road, and The Rookie. Like those previous films, Invincible is a heartstrings-pulling, tear-jerking, inspiring, hopeful drama of guts and determination where people like us overcome big odds to set an example for all those around.

Invincible's inspiring everyman hero is Vince Papale (Mark Wahlberg), a 30-year-old down-on-his-luck but affable bartender. A stud at backyard football, a lifelong Philadelphia Eagles fan, and everyone's shoulder to cry on, Vince is the glue that holds his working class friends together. And then, his life unravels financially and personally. 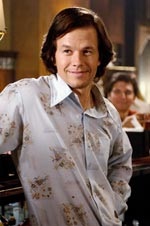 A new door of opportunity opens for Vince in 1976 when Vermeil, the new coach of the struggling Eagles, makes an unconventional move: He holds open tryouts. After unending teasing and encouragement, Vince finally agrees to go down to the tryouts. If nothing else, this "number one Eagles fan" figures it's at least a chance to be on the same field his heroes have walked.

Of course, you can guess how the story goes from there. They wouldn't have made a movie if he got cut on the first day. Instead, he's a fitting underdog hero. He's not big or strong or tough. But he has heart and he won't stop trying. His courageous journey from hopeless bartender to Philadelphia Eagle is given extra thematic weight because of the sad economic situation for industrial workers in urban Philly at the time. It's one thing to have a sports hero or team unite a city—but it's another when he's one of the people. In Invincible, you watch a working class guy's mere heart and grit galvanize Philly by refusing to stay put when knocked down and trading his seat in the stands for a helmet. This is a movie that families—especially those with die-hard sports fans—will enjoy together. Any Joe Blow sports fan will watch Papale walk out into Veterans Stadium or through its locker room and daydream about what it would be like if they could go from holding a foam finger to playing alongside their heroes. The movie reminds us why sports are so important—they inspire us because anyone can be a hero. 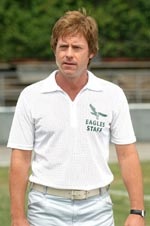 Evoking all of those endeared films is not necessarily a bad thing; the inspiring zero-to-hero sports story resonates in us. We want to tell and hear that story over and over because of how it makes us feel. We want a hero who brings us hope that maybe we can overcome odds too. We wantto be the underdog who rises to the top. That plotline really never gets old. But since it's been told so many times—and so well—weaknesses may seem more evident. In fact, if Invincible wasn't a true story, its clichés, far-fetched plot and predictability could be considered faults. But how can you blame the movie when it's just relating what really happened? You can't point a finger at the facts, but you can question the way the story is told. The movie is pretty much a by-the-numbers telling without much to set it apart from the long list of good sports films. In fact, Invincible's real unique aspect—the journey of a fan who's barely played the game all of a sudden suiting up for his team—is pretty much muted in favor of the well-tread "inspiring the city" plot.

Vince's buddies including Pete are a good example of friendship

While there is a great build and emotional payoff (hence my tearing up), the setup can feel forced and fabricated. Thus, the movie doesn't have the ultimate kick and weight of better pigskin films like Friday Night Lights and Remember the Titans. Most of the first half hour feels like a series of long conversations about how bad things are in Philly. Instead of letting a story naturally develop, plot points are just stacked up on top of each other in some sort of connect-the-dots game of needed info. For instance, when Vince's wife leaves him, the very next scene introduces a very attractive blonde (Elizabeth Banks). It's not hard to guess where things will go from there.

Another part of the film's forced-feel is that first-time director Ericson Core doesn't seem to trust the audience to know when things are dramatic and important. Instead, he conveys the idea with drastic zooms and long sequences of slow motion. There are so many scenes of Vince dramatically running in slow motion that you begin to wonder if Mark Wahlberg can control time.

At the tryouts with Coach Vermeil (right) looking on

But despite some rookie mistakes, Core makes more first downs than fumbles. Also serving as cinematographer, he includes two of the coolest football film camera shots I've seen. And he directs his actors well. Wahlberg and Kinnear are understated but solid. Wahlberg plays Vince, like most of his roles, with a gentle simplicity. He's a quiet, steady guy with a big heart. And you understand why Philly would fall in love with him. In one of the film's best scenes, you see why Vermeil would want him on the sidelines. Thinking he's about to be cut, Vince walks to his coach's office. There, Vince seems more genuinely concerned with how the rookie coach is doing than what's about to happen to him. This subtle and heartwarming touch defines Invincible's best moments—scenes of laugh-out-loud humor, tangible joy and real human caring.

In fact, this film is full of people loving on each other in community. The best moments of caring don't come from the somewhat lackluster and tacked-on love story, but from Vince's group of guy friends. This is a realistic and even perceptive look at the fraternity of guy relationships. The guys know each other, push each other, encourage each other, keep one another accountable and, unlike most movie guys, have actual emotions and nuance behind their actions. They are real people—with love for each other, faith in others, and some flaws and baggage.

In some ways, Invincible itself is a lot like Vince Papale. Neither are unique, or the best, or the flashiest—but they make up for it with lots of heart.

Rated PG for sports action and some mild language, this is a good family film. There's typical football violence and minor swearing. Most of the group bonding between Vince and his buddies is over lots of beer. Guys get drunk, and there's the impression that one of them is urinating in an alley. An unmarried couple kisses passionately and falls through a doorway, apparently on their way to bed.

Another year, and another inspiring story of an unlikely sports hero who made his dreams come true against all odds.

And yet, once in a while, that familiar formula can be satisfying. With Invincible, it appears we have a winner.

Invincible is the true story of Vince Papale (played here by Mark Wahlberg) who, at 30 years of age, left behind his work as a substitute teacher and bartender for a public tryout for his beloved Philadelphia Eagles—and, against all odds, he made the team.

David DiCerto (Catholic News Service) calls it "the kind of Cinderella sports movie too corny to believe if it weren't true. Director Ericson Core follows a generic underdog formula—think Rocky meets Rudy—but you'll find it hard not to cheer. … Ripping a page from the feel-good playbook of The Rookie and Miracle … the film owes much of its charm to the everyman charisma of Wahlberg's performance."

Christa Banister (Crosswalk) writes, "With an understated yet emotionally convincing performance that has the audience rooting for him all along, (not to mention the muscular physique he'd need to succeed), Wahlberg was a great choice for the lead role."

Marcus Yoars (Plugged In) says, "[D]on't let the familiar turf taint the positive messages in this gridiron go-round. … Barroom settings and a handful of content blips—including a kiss that apparently leads to more—draw a couple of flags, but it's obvious those behind the camera made a concerted effort to make this a movie fit for (most of) the whole family."

Mainstream critics are cheering—somewhat reluctantly, though, having been through so many similar films.