Are evangelical Christians really happier than their neighbors?
Sarah Pulliam|March 8, 2006

Evangelical Protestants are the happiest people in America. Or at least that's what they say.

Evangelicals are 26 percent more likely to describe themselves as "very happy" than Americans as a whole, according to a Pew Research Center survey released last month. Almost half—43 percent—of evangelical Protestants described themselves that way, compared to only 34 percent of Americans.

Christian Smith, a sociologist at University of North Carolina, said there are many possible reasons why evangelical Protestants rate higher than others on happiness surveys.

Many Americans probably define happiness in "a consumerist, superficial sense of I'm feeling good," Smith said. "There's a part of me that thinks evangelicals are kind of superficial" as well, he said. "But if it's well-defined, happiness is good."

It's probably not well-defined by most evangelicals surveyed, said Ruth Tucker, a missions professor at Calvin Theological Seminary who wrote about happiness in her recent book Walking Away from Faith. The Pew poll, she says, simply shows that evangelicals are expected to be happy.

"We all know the song 'If You're Happy and You Know It.' There are a number of little jingles like that about happiness in children's choruses," Tucker said. "Happiness is kind of a mark for an ... 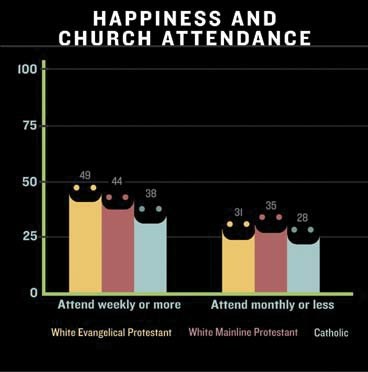