A popular bumper sticker reads, "I want to be the man my dog thinks I am."

It happens all the time—a dog waits outside the café or the grocery store, straining at his leash, or shoving his nose against the car window, waiting in dutiful vigilance until his master emerges. And then, barking! Tail wagging! And a good deal of scampering about! It's as if this reunion merits some kind of celebration. It doesn't matter if you're grumpy or irritable—your dog is happy to see you. That kind of unconditional love can melt even the toughest heart.

And it's that kind of unconditional love that has made Lassie the world's most famous and beloved dog. Well, that, her colorful coat, and her tenderness toward the boy she loves.

If you think I'm referring to Jeff or Timmy, then you must be thinking of the boys on the Lassie television series that ran between 1954–74. No, I'm talking about the nine-year-old boy named Joe Carraclough, who is Lassie's precious friend in the latest big screen adaptation.

Director Charles Sturridge has brought Lassie back to the screen, and it's likely that many moviegoers are rolling their eyes, writing it off as just another disposable kid-flick about wisecracking critters.

But think again. Lassie isn't just better than the other films currently being marketed for all ages. It's a rare work of substance, simplicity, and grace that deserves to be mentioned among the best features crafted for younger viewers in the last twenty years, including Mike Newell's Into the West, John Sayles' The Secret of Roan Inish, Alfonso Cuarón's A Little Princess, Agnieszka Holland's The Secret Garden, Carroll Ballard's Duma, and Andrew Davis's Holes. Some critics are using the word "classic" even though ... 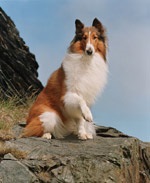