In all fairness, you need to know that Will Ferrell could probably make me laugh just by reciting the alphabet. I've found his film career somewhat disappointing, but his work on Saturday Night Live still makes my sides ache. I can't tell you how many times I've been in a church service, dutifully focused on God, only to be beset by an almost uncontrollable urge to giggle when the worship pastor started playing the keyboards and talking over the music in a manner quite like Ferrell's portrayal of middle school music teacher Marty Culp. (Me choking back laughter is not necessarily a pretty scene.) 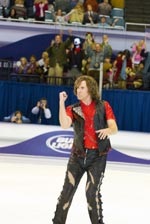 Will Ferrell as Chazz Michael Michaels

Suffice to say I was eagerly anticipating the SNL alum's latest role as one half of the first all-male figure skating team in the spoof-tastic Blades of Glory. The campy world of figure skating is ripe for parody and who else better to don the spandex than a tall, slightly pudgy Ferrell?

Indeed, one of the primary comedic drivers of the movie is the aesthetic absurdity of Ferrell as a figure skater. He plays Chazz Michael Michaels, a hard-bitten hedonist who got his start in the underground world of "sewer skating" in Detroit. His style is a bit like Aerosmith's Steven Tyler on ice—lots of crotch grabbing and making the ladies swoon. At the World Wintersport Games, Chazz ties with his fastidious nemesis, Jimmy MacElroy (Napoleon Dynamite's Jon Heder), for the gold medal. The two brawl when on top of the platform together, and both are subsequently banned from competition.

A loophole is discovered by Jimmy's stalker, desperate to have the object of his obsession back in the sport, and the two skaters reluctantly decide to compete as a pair. Jimmy was an orphan and child prodigy who was raised in privilege to skate with precision. His skating style, lithe frame, and general naiveté are a comedic juxtaposition to the oafish Chazz, and the two hurl insults at each other like 10-year-olds—you're just waiting for someone to whine, "You're not the boss of me!"

While Jimmy and Chazz train for their big comeback, the competing brother/sister team of Fairchild and Stranz Van Waldenberg (played by the real life husband and wife team of Will Arnett and Amy Poehler) is cooking up schemes to ensure their victory. Fairchild and Stranz are resplendently tacky and devious. They manipulate their younger sister Katie (The Office's Jenna Fischer) to spy on the odd couple, and later to step out on her budding romantic relationship with Jimmy.

It would be wrong to say Blades of Glory crackles with sexual tension. Perhaps sparkles is the right word here, due to the sequins that skaters are so fond of. Like the sequins, sex seems to cover everything. Though there's no real implication that Chazz and Jimmy have the potential to be lovers, it's clear that the humor of their pairing relies to some extent on the specter of them as a couple (notably, finding this intrinsically funny is quite un-PC). And Chazz is nothing if not a Lothario on blades. The admitted sex addict hits on Nancy Kerrigan with the line, "You an official here? Because you have officially [turned me on]!" Don't even get me started on all the crotch jokes. Even the women in audience were seen cringing after a few of the ill-placed blows.

There are several laughs in Blades of Glory, but there's still a lot of movie in between all of them. There seems to be enough grist for a sketch, but not a full 90 minutes. All of the actors do acquit themselves well. Heder seems like he just might coast his Napoleon Dynamite fame into a career as the straight guy to more antic funnymen, and Arnett brings a palpable energy to the screen. But while I still think Will Ferrell is a hilarious guy, these Blades are disappointingly dull.

From the moment he's introduced, Chazz Michael Michaels is obsessed with sex. His opening routine involves grabbing his crotch, stroking his nipples, and licking a woman's neck. He goes on to explain that he's a sex addict and the innuendo is thick throughout the movie. Everyone stays clothed, but Chazz does a lot of kissing and fondling of women throughout the movie. He also attends a support group for sex addicts, during which there is a lot of sexually charged talk. Also, the brother/sister team of Fairchild and Stranz Van Waldenberg share a passionate kiss at the end of the movie.

1 of 3
Will Ferrell as Chazz Michael MichaelsJon Heder as Jimmy MacElroyScott Hamilton, a real-life skating analyst, interviews the stars