David Belton covered the 1994 Rwandan genocide as a BBC reporter. He returned to the country to make a dramatic film—with a priest at the center of the story.
by Peter T. Chattaway |March 13, 2007

It has been over a dozen years since the Rwandan genocide—an atrocity in which as many as 800,000 Tutsis and Hutu sympathizers were killed by Hutu extremists in just a few months, while the outside world turned a blind eye or, worse, withdrew what little help it had offered in the first place. 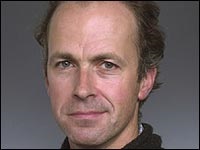 David Belton covered the genocide as a reporter for the BBC. He went on to become a producer of documentaries like War Spin and Soldiers to Be, and he returned to Rwanda for his first dramatic film, Beyond the Gates, now showing in limited theaters. (Look for our review on Friday.)

Beyond the Gates, co-written and produced by Belton, is one of a recent spate of films about the genocide that began with the Oscar-nominated Hotel Rwanda and also includes Sometimes in April, A Sunday in Kigali and the upcoming Shake Hands with the Devil. One thing that sets this film apart, though, is the fact that its protagonist is a Catholic priest whose response to the atrocity is rooted in his own religious convictions.

Belton spoke about the film in a phone interview from his office in Great Britain.

Why did you pick this topic for your first non-documentary?

Belton: I had been a journalist for the BBC in Rwanda in 1994, and had covered the genocide, and had spent quite a lot of time out there during the events that the film depicts. So it was a story that was very close to my heart. When you move from the world of documentary to the world of drama, you've got to be really sure of yourself and the messages you want to convey, because it's a much more powerful medium. And so I wanted to be sure that I was going to tell a story that was close to my heart, something that I felt very strongly about.

Were you aware when you chose this project that there were other Rwanda films in development at the time?

Belton: Yes. I knew Terry George was making Hotel Rwanda, and for a time we were kind of running along in parallel with them. But we fell behind them because we were very keen to make the film in Rwanda. [Hotel Rwanda was shot mostly in South Africa.] I knew the people there, and I knew that they would have wanted this film to be made in Rwanda. And it became very clear to me that we should be making it in the place where the actual story happened.

I think we've got a film that is very authentic and something that anyone who was involved in making the film found to be an extraordinary experience, and one they will carry for the rest of their lives. And of course it was wonderful to be in Rwanda and to help the Rwandans tell their own story.

Did going back to Rwanda and having to relive this bring back bad memories?

Belton: Yeah. The memories never go away, but certainly, going back brings the memories to the forefront. But to be honest, as bad as the memories are, they kind of disappear into the background when you start to form friendships with the Rwandans themselves, and everything they went through. My experience was very traumatic at times, but it was a thousandth of what was going on for Rwandans. I found certain scenes difficult to watch; there were times when I would just walk away, and that was fine for me to do that.

I think Rwanda was really pleased that we came there to make this film, and part of that reason, I think, is that the process of reconciliation for these two ethnic groups—Hutus and Tutsis—to come together and live together as one, as they did before 1994, requires a huge amount of reconciliation. And reconciliation involves going through the history of what happened, and talking about it. And I think our film, for all those who participated in it, and indeed for all those Rwandans who have now watched it, I think they found it a cathartic experience.

I think it was helpful, in terms of the reconciliation; it was almost as though they were being allowed to own their own trauma. This wasn't a bunch of westerners in white coats coming in with stethoscopes and telling them how they were feeling. This is about Rwandans actually taking part in the process of making this film, being very collaborative in it, and in that process, owning their own history for a change, rather than being told what to feel and what not to feel. So it was a very rewarding and emotional experience, to be there with Rwandans who wanted to be part of this.

And of course, there were Rwandans who didn't, who said we understand why you're doing this, we're glad you're here, but this is not something we want to go back and re-enact ourselves. And for those people of course, I have a huge amount of respect. They didn't take part in the film, but they certainly supported it.

Why does the story focus on the priest, or bring the religious element so into the foreground as it does?

Belton: The part of Father Christopher, played by John Hurt, is very much inspired by a man that I knew in Rwanda during the genocide, a European priest. He was only one of two European priests who stayed in Rwanda throughout the genocide, and in the course of his time there, he saved the lives of thousands of Rwandans, and he almost certainly saved the lives of myself and my television crew at the time as well. So I was profoundly moved by this man and his sense of spirit, his resolve, and his bravery in what he was doing and the way he was defying the extremist militias and refusing to leave. I felt that that was a role that deserved to be honored.

Hugh Dancy as a young teacher, John Hurt as a Catholic priest

But I think it went deeper, because when we started to write the story, we didn't start from the point of, "Let's write about a Catholic priest and kind of see what happens." The start point was, "What does it take to do the right thing? Do people have the depth of faith, the conviction, the courage to stand up and do what is right in their hearts?" And only by asking that question first did we feel comfortable about having a priest as the main character in the film. Because of course, through the journey that he takes in this film, he goes from a very spiritually depleted place to somewhere where his soul is very much revived, and it's in that moment of change that the question is answered, about whether it is possible to do the right thing. And in Father Christopher's world, to do the right thing is to re-assert his own Christian values.

But it would have been just as likely, or just as possible, to make the main character a doctor, for example. I knew a doctor in Rwanda, and there were times that he was very, very low, very despairing of what he was seeing, and he just didn't see the point in what he was doing. But he goes back into the operating theater the next day, saving people's lives, and he has his own spiritual resurgence. So it does have a religious theme, but it's about spirituality, I think, as much as anything else.

I was struck by how the film not only makes the main character a priest, but also shows people discussing the nature of the mass, or reciting the creed, things like that?

Being in Africa a lot in the last 20 years, I've seen priests who are at a low ebb—you can see they're just going through the motions—and you can see them a month later feeling really revived, because Africa is that sort of place. It isn't a place where you just bumble along in your own little world. You have big highs and big lows, it's that kind of continent. So we felt very strongly that if you're going to tell the story of a priest, then tell it correctly and embrace what he did, so that when people see what he finally decides to do, they kind of understand the journey that he's come from.

The film's original title was Shooting Dogs when it played in other parts of the world, but now that it's coming to the U.S., the title has been changed to Beyond the Gates. One report said the original title was perceived to be too "cynical" and would appeal to the urban arthouse market, but not to the spiritual heartland. Do you agree?

The film's title was changed for U.S. release

The film's title was changed for U.S. release

Belton: I don't have a problem with the new title. I don't think "Shooting Dogs" was cynical; I think it's a very tough title, and I think what we want to be able to do is reach out with this film; I don't want to alienate people. I think all things need to be adapted sometimes to bring in as many people as possible so they can share this experience. And everyone has different tastes, and certainly the European taste is slightly different from the American one. So the decision was made to change it.

If we can reach out into more than just the liberal arts community, and if we can get people into the cinemas that otherwise would not go, that's a good thing. Because when it comes to questions about who we are and what sort of world we want to live in, this film is posing those questions.

Were you surprised to hear that they were going to give it this special push to the religious market?

Belton: No, I wasn't surprised. I was really keen for it to happen. I went down to Louisiana last April to see some friends who had taken part in the film. They were really keen to show the film to an audience, and we got a packed audience—500 people crammed into the theater. And they all just came out absolutely blown away, and they all took something very strong and spiritual from it, in a way that I hadn't witnessed before in the U.K. or in Europe. Everyone took their own kind of spiritual feelings away from it. This film does do that; it does really get people in that way. And why not put a push in that direction, to get audiences that wouldn't otherwise see a film about an African genocide, and get them to feel that this is a really worthwhile experience and they're really glad they saw it?

Go to the official website to learn more about the film and to see the trailer.