Shave 109 minutes off it and I Now Pronounce You Chuck & Larry could make a fine election-year campaign ad. But wow—those extra 109 minutes are brutal. This kind of smug, preachy, and mostly unfunny sloganeering—cleverly disguised as the must-see comedy of the summer!—is enough to fill you with a healthy dose of righteous indignation when it flickers across your screen for a few seconds at a time, when you're half-distracted anyway by refilling your soda before the second half of House. As a feature length film, it's simply dispiriting; it's telling that absurd and illogical leaps in the narrative are the least of the film's problems, what with everything else reeking of such utter vileness.

I said it was mostly unfunny; to clarify, there is precisely one actor in this whole sordid affair who, from time to time, reaches the level of Mildly Amusing. That's the great character actor Steve Buscemi—almost entirely wasted here, but his creepy pension inspector is the best thing here. And it's telling that he's the only person here whose humor comes from something other than perceived sexual orientation. Everyone else in the film serves either to act homosexually—playing it up for hypothetical laughs—or to make jokes about homosexuality. 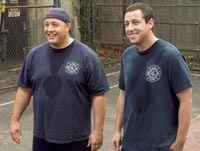 Adam Sandler and Kevin James—both very talented in, you know, other movies—play the title characters, and inadvertently serve to expose both the film's absurdity and its hypocrisy. In the first half of the film, Sandler and James are two heterosexual firefighters—and not just heterosexual, but aggressively heterosexual. Sandler's Chuck is a womanizer who is seen romancing several lingerie-clad Hooters girls at the same time; James' Larry is a widower who is devastated by his young son's aversion to sports and taste for dancing and theater. Both men wisecrack about homosexuality all the time, making the film's first half feel like an extended version of the "You're Gay Because … " game from The 40-Year-Old Virgin.

But a near-death experience and Larry's desperation to see that his pension money goes to his children if he dies leads the two men to hatch a scam wherein they pretend to be a homosexual couple in order to have Larry's assets go to Chuck, who can in turn take care of Larry's kids in the event of an accident. The sex-obsessed Chuck, of course, is skeptical, and even after their plan is put into action, the film continues to mine lewd jokes about stereotypically gay behavior as its sole source of comedy. And of course, that grows tiresome rather quickly, so the filmmakers throw in Jessica Biel as a lawyer helping the two men to fight the city's challenge of their legitimacy. She's not an especially great actress, which is probably why she's in the film; a more talented performer might have been unwilling to appear in such skimpy outfits and serve as the butt of still more vulgar sexual and anatomical jokes.

Then, not long into their scam, Chuck and Larry undergo a sudden change of heart—and by sudden, I mean abrupt to the point of being totally ridiculous. The two men go to a gay party, where money is being raised for AIDS research, where they are met by a large group of evangelical Christian protesters, led by former Daily Show goofball Rob Corrdry. They're hateful and completely devoid of any kind of Christian love—which is, we must admit, characteristic of some such evangelical groups—and Biel's character is quick to inform us that they are ignorant, will not listen to reason, and speak out against homosexuality simply because they are miserable and want everyone else to be miserable, too. (It's a long way from Biel's Christian character as Mary Camden in the TV drama 7th Heaven.) The camera alternates between shots of the angry protesters and the sad, tear-streaked faces of the gay men and women, who really just wanted to party.

Never mind the fact that this portrayal of evangelicals is exactly the kind of stereotype that the film later preaches against. What's bizarre is that this incident is enough to change not only the hearts of Chuck and Larry, who immediately come to empathize with and even champion the gay community, but it even alters the entire direction and tone of the movie. The gay jokes are dropped, and in their place the film gives us a bunch of sermonizing about the mistreatment of homosexuals and how, even though Chuck and Larry aren't really gay—they are, in fact, using homosexuality as a scam—people who are really gay are only that way because that's how they were born, and there's nothing at all wrong with that.

And "sermonizing" is most assuredly not too strong of a word; the once-great Dan Aykroyd—playing the fire chief and reduced mostly to making jokes about his prostate—has his time to shine in the film's climactic scene, where he delivers what is surely supposed to be a stirring diatribe about how sexual orientation has nothing whatsoever to do with a person's character or morality. Somehow, the filmmakers think they can spend half a movie mocking homosexuality and then suddenly make a meaningful statement about its dignity.

Make no mistake: To say that the movie is both unfunny and sometimes nonsensical is to be generous. This so-called comedy doesn't bother trying to hide its ethical and political platforms under anything resembling humor. Thus, this isn't just a film that represents anti-biblical views on marriage and homosexuality; it aggressively forces these views upon us, and paints anyone who disagrees as an ignorant bigot. Devoid not only of truth but of any kind of craft, I Now Pronounce You Chuck & Larry is the kind of pure-and-simple propaganda that doesn't lead to any kind of compassion or understanding; it only leads to anger and divisiveness. Of course, the movie's star power—the ads bill it as Sandler's long-awaited return to blockbuster comedy—ensures that it will make big bucks at the office, but responsible Christians would do well to simply pronounce this the most despicable marriage to ever be seen on the big screen.

I Now Pronounce You Chuck and Larry is rated PG-13 after appealing the initial R rating. The R rating was probably more appropriate; there is lewd sexual humor throughout the film, scantily clad females, nude males, profanity, blasphemous uses of the Lord's name—not to mention blatant endorsement of homosexuality as well as broad swipes at evangelical Christianity and a mockery of traditional marriage.

1 of 3
Larry (Kevin James) and Chuck (Adam Sandler) are straight guys who, er, don't play it straightJessica Biel plays a lawyer with a chip on her shoulder about ChristiansDon't be deceived--this movie isn't funny