Just three months after an unimpressive theatrical run, The Nativity Story is now out on DVD, looking for a second "life" at video stores and in home libraries.
By Mark Moring|March 20, 2007

After a disappointing theatrical run in December and early January, The Nativity Story releases to DVD today—a tale of the birth of Jesus just weeks before Christians worldwide observe his death and resurrection at Easter.

"I think it's good timing," director Catherine Hardwicke told CT Movies. "And I'm excited that a lot of people are going to be seeing it for the first time. So many people have told me they missed it in the theater, and that they can't wait to see it."

The "can't wait to see it" part of that observation is good news for New Line Cinema, which spent about $65 million making and marketing the film, but only earning about $46 million ($38 million domestically) in its theatrical run. The studio will likely more than recoup its losses in DVD sales, especially as they plan to release a two-disc special edition just before Christmas.

But it's the first part of Hardwicke's observation—that so many people "missed it" in theaters—that had New Line execs (and other Hollywood bigwigs who were watching closely) wondering, "Where are all the Christians?" They weren't expecting the monster numbers of The Passion of the Christ ($371 million domestically, $612 million worldwide), but they certainly hoped to do better at the cineplex.

Said Hardwicke, "We hoped that more people would see it, of course."

A January story in The Los Angeles Times explored possible reasons why the film didn't do very well. Laurie Foos, a student a Fuller Theological Seminary, told The Times she tried to see The Nativity Story on Christmas Day, but the local theater had already dropped it. Foos said she might have tried to see it sooner (it opened Dec. 1), but hadn't heard anything about the film in the Christian community: "I wish there had been more awareness," she said. "It was lacking that kind of 'Oh my gosh, you have to go see that movie' factor."

Hardwicke said she wished there had been more time to promote that "oh my gosh" factor. But New Line execs green-lighted a rush job, opting to push it into theaters less than a year after writer Mike Rich finished his script. Hardwicke and her team barely had eight months to make the movie, leaving very little time for marketing and publicity—especially to the Christian market and through churches.

Hardwicke noted that director Mel Gibson had finished The Passion at least six months before its release, and thus had time to fly around the world promoting it to—and screening it for—church leaders. They didn't have that kind of "publicity window" for The Nativity Story.

"Mel put in a beautiful effort going to so many churches and getting people excited," Hardwicke said. "But he had at least six months, and we had something like 25 days. New Line knew that would be an issue in January [2006] when they decided to release the film in December. I think they were trying to find ways to overcome that short amount of time [for publicity], and I guess they didn't quite do it."

When asked if she wished they had slated the release for December 2007 instead of 2006, thus giving her twice as long to make the movie—and giving the studio much more time to promote it—Hardwicke laughed and said, "I was the prime advocate of that two-year plan! I was like, 'Can't we do it next Christmas?' I think it would have been nicer to have maybe a little bit more relaxed schedule, you know?"

"From a marketing standpoint, we didn't get to the audience in an aggressive enough way to build an urgency to see the film," Godfrey said. "The box office tells you that."

Like Hardwicke, Godfrey noted the difference in the lead time for The Passion as opposed to Nativity.

"Mel was screening The Passion for six months, we were screening ours for one," Godfrey said. "That certainly has a big effect on people knowing about the movie—just plain awareness. There were definitely a lot of church leaders I spoke to after the fact who said, 'We hadn't been reached.' So, we didn't get to everybody."

Asked if he was surprised to hear that from church leaders, Godfrey said, "I was and I wasn't. I mean, the truth is that about a month in advance of the film's release, you know that you can't catch up; you realize you're not getting to everybody. And by that point, there's only so many people to reach. You can't save the movie a week ahead of it opening. You really need to have been ahead of it by two or three months."

But Godfrey said he has no regrets about how it was handled. 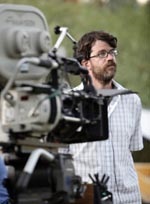 Godfrey on the 'Nativity' set

"By about December 20th, I quit thinking about it," he said. "You can kill yourself obsessing about how it could have done better, but you just need to move forward. And the truth is, we remain very proud of the movie, and we think those who saw it—and will see it on DVD—will find something special.

"We don't have any regrets. We really feel like the movie works. And you can't exclusively make movies for commercial reasons. You really do need to make them from the heart, and because you're passionate about them."

Godfrey said the good news is that he and co-producer Marty Bowen—both Christians—feel like the table has been set for more faith-based films from major studios (New Line produced the Lord of the Rings films), and any lessons they've learned from The Nativity Story can be applied to future projects.

"I think we've built a strong foundation," Godfrey said. "I feel like this will bear more fruit down the line for more faith-based films. And I feel confident that we've made relationships around the country with church leaders, and next time we'll be better prepared with our marketing plan.

"We feel like there's enough of an audience that does want these movies. Not necessarily Bible stories, but inspirational movies. Our instinct right now is that the next one we do might be more of a contemporary faith-based movie."

Godfrey said he's had "numerous conversations" with New Line CEO Bob Shaye about The Nativity Story's performance. "His evaluation was kind of like a shrug of the shoulders," said Godfrey, "and that you never know exactly why a movie didn't become a huge hit or not. But he's very proud of the movie, and said they want to make more movies for the faith-based audience. It's not like The Nativity Story made them say, 'All right, we gave it a shot, and we're done with that.' They actually came out of it more emboldened by it."

Hardwicke said she's excited about the DVD because it grants the film a "new life" after its theatrical release. And she hopes that life will endure for generations, as families pull it out year after year along with the likes of It's a Wonderful Life, A Christmas Carol, A Christmas Story, and other holiday favorites.

She also thinks it'll translate well from the big screen to the small.

"In a way, our film has a big quality in some of those beautiful, amazing shots in Morocco and the desert," she said. "But we do think people will be able to enjoy it in a more personal way at home, because it's an intimate story of two people [Joseph and Mary] and their struggle with their faith and their hope and that they're doing the right thing."