The Alzheimer's Association estimates that someone in America develops the disease every 72 seconds. Every 72 seconds another world starts to disappear into a fog of forgetfulness and confusion. In Away From Her, we see that fog envelop the 45-year-old marriage of Fiona and Grant Andersson.

Unwilling to yet yield himself to Fiona's diagnosis of Alzheimer's, Grant posits at one point that his wife has always been an unusual person. Perhaps her forgetfulness is simply an outgrowth of her free spirit? While this is clearly wishful thinking, Fiona is indeed an atypical senior citizen. She and Grant are both aging gracefully, but Fiona, played by 60s bombshell actress Julie Christie, is lithe and winsome. Her flowing silver hair is perpetually disheveled in a come-hither way, and she moves around a room like a woman half her age.

Far from having devolved into a sort of platonic friendship, it's plain that Grant and Fiona's romance is robust—and this is one of the true delights of the movie. It doesn't ask us to imagine how the two might have been as young lovers to properly relate to them. Instead, we can see that the two are fully orbed partners in the here and now. But as Fiona's short-term memory fades, her long-term memories of "things we don't talk about" floats to the surface and tests her carefree composure. Grant, played with heavy-lidded aplomb by Gordon Pinsent, looks like a lion that's had the wind knocked out of him when Fiona references his 20-year-old infidelities out-of-the-blue and says she wishes it were these memories that would disappear into the fog.

Instead, these memories linger. What fades is the past 20 years in which Grant has redeemed himself by retiring from his post as a college professor and moving ...

Join in on Facebook
Tags:
None
Posted:
May 4, 2007
More From:
Lisa Ann Cockrel 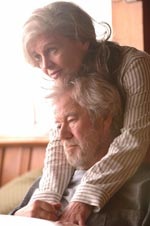