Fishermen have a tendency to return from fishing trips with tales of "the big one that got away." But not Stewart Kane. No, he's come back from a weekend fishing trip with a very different story. And he'd rather keep it to himself than discuss it with his wife.

In Ray Lawrence's new film Jindabyne, Stewart (Gabriel Byrne) and his buddies, Carl (John Howard), Rocco (Stelios Yiakmis), and Billy (Simon Stone), venture out of the Australian town of Jindabyne into the Snowy Mountains, where they discover the dead body of a 19-year-old Aboriginal woman (Tatea Reilly) floating naked in the river.

They're horrified, of course. But they also know that if they rush back to town with the news, that will spoil their much-anticipated escape from everyday troubles. As Stewart ties the woman's ankle to a branch to keep her from floating into the rapids, he sets in motion a chain of events that will throw his community into turmoil.

Laura Linney and Gabriel Byrne as Clair and Stewart Kane

While the fishermen and their families are all horrified by the discovery, it's Stewart's wife, Claire (Laura Linney), who seems the hardest hit. And it's easy to see why. Stewart shuts her out in many ways. She can't get her cantankerous, Irish husband to stop brooding over his beer and offer her satisfying answers about "what happened out there." To make matters worse, when his mother Vanessa (Betty Lucas) comes to visit, he hands her control of the household.

The women in this town seem cursed, left to deal with insensitive, arrogant, fearful husbands. Stewart's fishing buddies have a "no women allowed" policy for their wilderness ventures, and the other men in town seem exasperated by any appeal for compassion from the women. And Claire is frustrated to find that the women are compliant, following the men's example, submerging themselves in distraction, escapism, and nostalgia when they should be addressing their problems.

Where is the church? The local minister makes no effort to help his community; he sits in his sanctuary, waiting for the wounded to come to him.

Even the children are coping with pain. The Kanes' young son Tom (Sean Rees-Wemyss) begins down a path of experimental violence, goaded by a deeply wounded girl named Caylin-Calandria (Eva Lazzaro), who is killing small animals when her grandparents (John Howard and Deborra-lee Furness) aren't looking. This is a subtle suggestion about how a person, left alone with their wounds, might become a murderer, like the deranged old man (Chris Haywood) who lurks in the background.

Perhaps Claire's sympathy for the dead woman reveals the way she feels about her own life. Like the victim, she's been "run off the road" and silenced. She's bound to this family by a thread, stranded, with no control over her circumstances. What happens if she breaks that thread and runs away? What happens if she abandons her marriage and ends her unwanted pregnancy? Will she be drawn into the rapids and disappear, with no one around to care?

Jindabyne is not the first movie based on Raymond Carver's short story, "So Much Water So Close to Home." Robert Altman included this story in Short Cuts, his sprawling tapestry of Carver adaptations. 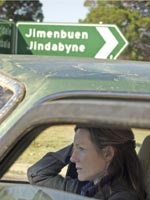 Linney turns in perhaps her best-ever performance as Clair

Lawrence's treatment bears little resemblance to the Altman version. He paints far beyond the outline of the Carver story, creating a community of interesting, complex relationships, and setting it in a place with a history that lends itself to metaphor. Jindabyne's geography changed when a dam was built to generate electricity. The waters rose, and the town had to move to higher ground while the "old town" was submerged like Atlantis. This suggests that "progress" has been a terrible, costly compromise. But it also becomes a powerful way of suggesting that each of Jindabyne's residents is concealing a world of secrets and suppressing the pain of loss.

Lawrence and his screenwriter, Beatrix Christian, have crafted a complex, layered work of art that raises questions about what holds marriages, friendships, and communities together through betrayals, clashes, and disappointments. While it's hard to miss the moment when Stewart stands next to a Mars Bar advertisement—that's either a subtle joke or a wonderful accident—it's much more than a "Men are from Mars, Women are from Venus" movie.

Jinabyne's greatest strength is its array of memorable performances. Byrne does what he does best—he makes Stewart a dark, troubled, haunted man. Furness—Hugh Jackman's wife for more than a decade—proves she's a formidable talent herself. And the children are remarkable in some complicated, emotional scenes.

But the film belongs to Linney (The Exorcism of Emily Rose). This is her most complex and powerful big screen performance. Thanks to her, Claire wins our sympathies in spite of her alarming, idealistic tendencies. Linney is absolutely convincing every step of the way.

Lawrence's last film, Lantana—a fantastic 2001 drama that was sorely overlooked—struck a variety of chords. Jindabyne's most serious flaw is its unrelentingly somber mood, which is amplified by mournful score. As a result, 123 minutes feel more like 180.

Jindabyne and Lantana share strikingly similar themes. (They also feature the delightful presence of Leah Purcell in supporting roles.) But they reach very different conclusions. Where Lantana moved us through trouble into hope, Jindabyne feels more like a lament for irreconcilable differences. It challenges us with many complicated issues—cultural, ethical, and religious—but it leaves us with very little resolution. We're left wondering if there is any hope for the marriages or the community. Will they go on suppressing their pain and ignoring their differences? Is reconciliation even possible?

It'll take more than a few apologies, more than a song and a mystical puff of smoke, to bring healing and consolation to this town.

Jindabyne is rated R for disturbing images, language and some nudity. The nudity is brief, with the discovery of a dead body stripped naked. There's brief violence, and some truly disturbing conversations and scenes of explosive rage between husbands and wives.

1 of 3
Laura Linney and Gabriel Byrne as Clair and Stewart KaneStewart and his fishing buddies Rocco (Stelios Yiakmis), Carl (John Howard), and Billy (Simon Stone)Linney turns in perhaps her best-ever performance as Clair