We have to decide whether we have a stingy or a generous God.
Richard J. MouwApril 3, 2008
This article is from the April 2008 issue. Subscribers can read all of CT's digital archives.

Christians have not always been at their best when encountering serious believers from other religions, but Fuller Theological Seminary President Richard J. Mouw is a notable evangelical exception. In his sustained work across the Catholic-Protestant divide and in Fuller's pioneering dialogues on Jewish- and Muslim-Christian relations, Mouw has modeled charity and clarity in the face of skepticism and even some vocal criticism. Thus, he is a valuable contributor to our 2008 Christian Vision Project conversation on the question, Is our gospel too small?

Charles Hodge was a severe critic of the theology of Friedrich Schleiermacher. A champion of Calvinist orthodoxy at Princeton Seminary in the 19th century, Hodge had witnessed the influence of the German theologian during his own graduate studies in Germany, and was deeply disturbed by what he saw as Schleiermacher's rejection of the Bible as an infallible divine revelation. Schleiermacher's embrace of the rationalist critique of biblical authority, Hodge insisted, undermined the most fundamental tenets of the historic Christian faith.

But on the same pages of Systematic Theology where Hodge set forth his critique of Schleiermacher—who had by this time been dead for several decades—he included a brief personal footnote about Schleiermacher. During his studies in Germany, Hodge reported, he had frequently attended services at Schleiermacher's church and had been impressed that the hymns sung there "were always evangelical and spiritual in an eminent degree, filled with praise and gratitude to our Redeemer." He went on to note that he had been told by one of Schleiermacher's colleagues that often, in the evenings, the theologian would call his family together, saying: ...

An Open-Handed Gospel
expand
hide this 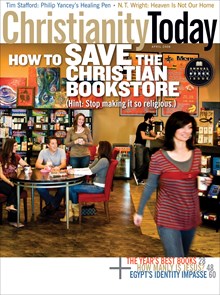 This article is from the April 2008 print issue. Subscribe to continue reading.