Columbia Records recently released Tell Tale Signs, the eighth installment of their official "bootleg" series of Bob Dylan rarities. The album includes two discs of outtakes, soundtrack cuts, live recordings, and general leftovers from the past two decades of Dylan's recording career—and it's a recording that finds Dylan, at the age of 67, to be just as cagey, elusive, and utterly inscrutable as ever. Which seems to be part of a larger trend: In the past few years, Dylan has saturated the market like never before, opening up the book of his life in the form of documentaries and feature films, a TV special and an autobiography, telling us more about himself and his work than ever before. Not surprisingly, Dylan's transparency has led to more questions than answers; it seems the more he tells us, the less we actually know about him.

Not that many fans would complain; part of Dylan's appeal has always been his mystery, an allure that attracts people from all walks of life and all musical tastes. That mysterious allure took an interesting turn in the late 1970s, when Dylan notoriously announced that he'd been born again and proceeded to record a trilogy of overtly Christian albums, even refusing to play his earlier, "secular" songs at many of his concerts. It was a baffling, beguiling chapter in one of the most colorful and unusual careers in rock history, one that found Dylan opening up about his spiritual life while also adding to his mystique. 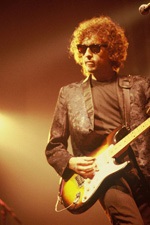 Such is the subject of Inside Bob Dylan's Jesus Years: Busy Being Born … Again!, a new documentary that goes to great lengths to recreate that seminal period of Dylan's career and find some answers in it.

Not surprisingly, the film leaves more questions than answers, and even after viewing it, Dylan-ologists will find him no less mysterious. And yet, for the way it recreates the mood and atmosphere of that time in Dylan's life, contextualizes it within the broader confines of his career and work, and poses bigger questions about art, faith, commerce, it's a sometimes insightful film that's well worth watching.

But for whom is it most worth watching? The film is far-reaching, providing background for those less familiar with Dylan's career, going into painstaking detail about the reception of his first Christian album, Slow Train Coming, even discussing some of the technical, musical aspects of that seminal recording. This broad approach is both its greatest strength and its greatest weakness; it ensures that there's something here for both hardcore Dylan fans as well as evangelicals who are simply curious, but it also means that, as a movie, it's a bit scattershot, and at times unfocused.

But for its wealth of familiar history and new insight, it's ultimately a piece of work that offers ample reward. Director Joel Gilbert—who himself sports a mess of curly hair that makes him look a bit too much like a Dylan impersonator—coaxes some thoughtful responses from his interview subjects. Alas, Dylan himself is not interviewed here, except in a few short seconds of archival interview footage from the '70s. But Gilbert does speak at length with Bill Dwyer, the Vineyard pastor who mentored Dylan immediately after his conversion. Hearing a pastor talk about the experience of having Bob Dylan in his Bible study is alone worth the price of admission, and Dwyer's insights are invaluable for setting the scene, explaining the spiritual climate of that time and place—and how it led Dylan to make his Christian profession.

Much of the documentary hinges upon the recording and subsequent performances of the material from Dylan's landmark album Slow Train Coming—the first of his three evangelical records, a Grammy winner, and the only one of the three to receive any kind of positive accolades or critical praise. Gilbert speaks with Regina McCrary, Dylan's backup singer from those sessions, who speaks at length about the influence of spiritual music on that album and shares fascinating insights into the nightly prayer meetings that Dylan insisted upon before every concert. Spooner Oldham, legendary keyboardist and current member of the Drive-by Truckers, and producer Jerry Wexler also show up, providing technical insight into the album but also into the mood of those early concerts and recording sessions. If nothing else, this section of the film is valuable because it makes a strong case that Dylan's Christian convictions were sincere. 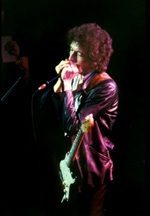 Mitch Glaser, a founding member of Jews for Jesus, provides insight into the link between Dylan's Christianity and his Jewish background, and talks about distributing evangelical tracts outside of Dylan's shows. But the surprise highlight of the movie is hearing from legendary rock critic Joel Selvin, who reviewed Dylan's first "Christian concert" appearance and notoriously dubbed it "Dylan's God-Awful Gospel." A non-believer, Selvin speaks candidly about the frustration he felt at Dylan's newfound religious message, but also admits that, with the benefit of hindsight, he sees the bravery and sincerity Dylan brought to those shows. And that, as much as anything, is what this documentary is all about—making sense out of Dylan's turn into Christian music, and making a case for his stunning bravery in the face of an audience that, by and large, resented him for it.

It isn't until the final few minutes that the film takes a disappointing turn, essentially saying that Dylan's conversion was nothing more than an artistic stage in his career that he quickly abandoned—an observation that seems at odds with earlier statements about Dylan's sincerity. For those who follow Dylan's music even today and continue to hear the ring of biblical truth in his songwriting, it's a frustrating coda to an otherwise fine film.

On a purely technical level, Gilbert's movie is very rough; the transitions between topics and interviews are not always smooth, and a Dylan tribute band plays cover songs in the background throughout the entire picture, which grows tedious and distracts from the seriousness of some of the subject matter. But as a picture of a man of music and a man of faith—a pilgrim who's still making progress—this is a frequently riveting historical document, and proof enough that, for Christian and secular audiences alike, Bob Dylan remains both as elusive and as inspiring as ever.

Inside Bob Dylan's Jesus Years is not rated, but there is nothing objectionable here except for a handful of cases of mild language.

1 of 3
Bob Dylan performing around 1980Dylan and band, 1979Playing the harmonica