The Hellboy sequel opening soon is just the latest in a long line of films about battling supernatural baddies—with the Cross often wielded as a weapon of goodness.
by Steven D. Greydanus|July 8, 2008

So proclaims the tagline for Hellboy II: The Golden Army, opening in theaters this week.

Well, he definitely needs explaining. With his horns—filed to stumps or not—as well as his red skin, goatee and tail, Hellboy overtly embodies universally recognizable cultural iconography of the enemy of mankind in the great war of powers and principalities.

This imagery isn't limited to Christianity. George Lucas claimed to have included Hindu and Greek mythology in researching the look of the similarly demonic-looking Darth Maul. ("A lot of evil characters have horns," Lucas told Bill Moyers in 1999).

Still, Hellboy's world—like those of other recent supernatural-themed films including Constantine and Ghost Rider—seems significantly shaped by Christian culture. (All three of these films are based on comic books; other recent comic-book movies lacking supernatural themes have offered similar instances of religious imagery, including Daredevil and X2.)

Hellboy himself is a Dark Horse Comics character, created in 1993 by Mike Mingola. In the comics, Hellboy is a demon brought to earth as an infant by Nazi occultists, who intend to use him for evil purposes. But after being rescued by Allied Forces, he ends up being raised by the USA's Bureau for Paranormal Research and Defense (BPRD), and grows up to be large, red-skinned, with a tail, horns (which he files off), and a giant right fist of stone. He's one of the good guys, fighting the occult and demons as one of the BPRD's special agents.

As a "good demon," Hellboy may be a walking oxymoron, but he's the singular exception to the rule. The first Hellboy movie establishes the occult world as a distinctly unfriendly place; the title ... 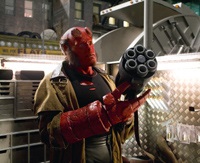