A list of the ten most influential modern worship albums from the last decade, offering new songs that changed the way we worshipped the Lord through music.
Andree Farias|July 29, 2008

Hard to believe that it's already been a decade since modern worship began to revolutionize the way the church used music to glorify God (not to mention transforming the way the Christian music industry approached publishing). Modern worship doesn't have an official anniversary—songs like "Shout to the Lord" and "Lord I Lift Your Name on High" were already staples in the church, and labels like Vineyard, Maranatha, and Integrity had been trying to introduce modern worship for years. But several best-selling milestones all happened to release around the same time, paving the way for a phenomenon that still continues ten years later. Below are 10 albums (presented in approximate chronological order) that remain essential to any modern worship library.

For those already familiar with the band in the UK, this was merely a two-disc collection of the previously released worship EPs. But for those in America, Cutting Edge was the first introduction to Delirious, a U2-styled precursor of modern worship with an already sizable repertoire of enduring classics including "I Could Sing of Your Love Forever," "Did You Feel the Mountains Tremble," "Lord You Have My Heart," and "Shout to the North." The quality of the material would eventually pale next to the group's subsequent artistic moves, but something about the rawness, intimacy, and simplicity of the performances shaped the way State-side worshippers viewed their own approach to praise music. Cutting Edge challenged them to not only sing to the Lord a new song, but to also write rallying cries for the church and a generation ready to lift up the name of Jesus with a voice of its own.

The lone studio release from the original members of ... 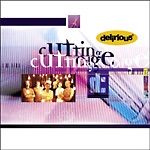