Timothy C. MorganMarch 7, 2008
This article is from the March 2008 issue. Subscribers can read all of CT's digital archives.

Seventy percent of American men ages 18–34 view Internet pornography once a month. This shocking fact is one of many that CT consulting editor John W. Kennedy found during his research for this month's cover story, "Help for the Sexually Desperate" (page 28).

Stigma and fear work against Christians who wish to address this issue in the community of their church. John himself bears witness to this reality: He became motivated to write about sex addiction after his pastor stonewalled his request to start a confidential men's accountability group. The pastor basically said this hot potato was too hot to handle. After much prayer, John decided to change churches; he then contacted CT to begin writing this article. 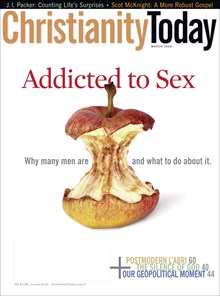 This article is from the March 2008 print issue. Subscribe to continue reading.