11 of today's top Christian artists and songwriters put aside their egos—and royalties—at the Compassionart songwriting retreat, united in their effort to make a tangible difference in poverty-ravaged countries around the world.
Christa Banister|March 3, 2008

Back when Michael Jackson was the indisputable King of Pop, he and fellow hit-maker Lionel Ritchie recruited an impressive list of pop music's royalty to help raise money for starving people in Africa. The instrumental tracks for what ended up being the iconic hit "We Are the World" were sent out ahead of time for pop/rock icons Stevie Wonder, Billy Joel, Bob Dylan, Ray Charles, Bruce Springsteen, and many others to rehearse to, with a friendly reminder to "check their ego at the door."

To underscore that simple request, there was a piece of masking tape on the floor for each person to stand on—one piece no larger than the other. Following the American Music Awards in 1985, the artists entered the recording studio and were neatly arranged in a semi-circle around six microphones. The strategy apparently worked, or else there would have been some juicy media coverage on how the charitable collaboration generated a series of diva fits.

Imagine if Paul Simon had suddenly decided he wanted to changed the lyrics, or if Diana Ross wanted to sing a line in the first verse rather than save her entrance toward the end. If an opportunity for constructive criticism had been available, would that have changed the artistic camaraderie? I'm guessing so.

Which is precisely why the recent Compassionart retreat in Perthshire, Scotland was such a unique all-star collaboration. Sure, there were plenty of big names from Christian music involved, featuring Martin Smith and Stu Garrard of Delirious, Michael W. Smith, Steven Curtis Chapman, Israel Houghton, Darlene Zschech, Matt Redman, Tim Hughes, Paul Baloche, Graham Kendrick, and Andy Park. And much like the USA for Africa event, the artists came together for a greater cause than their own ... 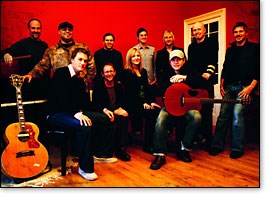