Because of immense buzz for this first film adaptation of Stephenie Meyer's Twilight series of novels, some have compared this tween and teen phenom to Harry Potter. Like the last two Potter movies, this vampire romance film made Fandango.com's top ten list of all-time advance ticket sales—thanks to a rabid fan base whose hearts were set on swoon ever since they first saw images of the vampire and werewolf dreamboats they've fallen for in the books.

But this is not Harry Potter. As Entertainment Weeklyreported last week, the seven Potter books have sold 400 million copies; Twilight's four books have sold 17 million. And the most crucial difference: The Potter books—and movies—seem to draw all ages and both genders. Twilight captures young girls. So, can Twilight satisfy the teen girl devotees of the books and reach a bigger audience too?

Well, I think most Twilight fans will eat this up like vampires at a blood bank. The movie, directed by Catherine Hardwicke (The Nativity Story, Thirteen), is very true to the book in telling Meyer's soap opera of forbidden love and angst with passion. I saw the film at a public screening with many young girls sporting Twilight shirts and even vampire regalia. I overheard them saying things like, "That was amazing," "I wish it would have gone on forever," and "It was everything I hoped for."

But on the flip side, the adults nearby were saying things like "That was horrible" and "I thought it wouldn't end." I'm somewhere in the middle. While I think the adaptation has some great touches, I don't think the film does much for the uninitiated or adults. Boys will really only like the big fight at the end—if they're still awake.

Twilight is a simple love story—with a twist right out of Buffy the Vampire Slayer—that taps into the longings of lovesick girls. High schooler Bella Swan (Kristen Stewart) moves to Forks, Washington, to be with her dad and feels alone and miserable. That is, until Edward Cullen (Robert Pattinson) mysteriously enters her life. There is something different about the ridiculously handsome, pale, and moody Edward and his brothers and sisters. And that something is that they're vampires who've chosen to live as a family and be "vegetarians"—in other words, only eat the blood of animals. Still, Edward craves human blood. So when he is drawn to Bella romantically, he knows he should keep a distance because of the temptation she presents to the killing monster inside him. Is their love worth the danger? 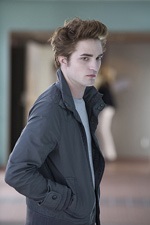 Meyer, a Mormon, interjected her book with moral themes with which Christians resonate. For more on this, see this story from teen mag Ignite Your Faith about the books' handling of the supernatural, romantic love and temptation. (While the use of vampires and other "evil" creatures can be offsetting to some Christians, they are not symbolic of demons here. They are merely a story device to create a forbidden and mysterious love interest. In fact—save for about 10 minutes of vampire action at the end—the Cullens could just be a lightly-pigmented family with superpowers.)

In some ways, Meyer's thematic nuance is lost in the movie version. But still, it is pretty clear that Edward's temptations to attack Bella, his chivalrous setting of physical boundaries for them, and Bella's complete willingness to let go of her soul (literally in the vampire mythos) to give Edward her eternal love are all big metaphors for sex, lust and the allure of the forbidden. (By the way, Meyer chose an Eden-like apple as Twilight's book cover image for a reason.)

In the book, this is an interesting look at dealing with temptation and boundaries, but the movie's love story is pretty much all about sexual attraction. I'm also not sure why the movie's Bella is fascinated by Edward. He's hot, he's a bad boy, and he wants her. Well, he wants her for dinner. But for this lonely girl, being wanted at all is enough. And of course that idea of being wanted, being known, and being passionately loved has really tapped into the desires of the books' teen audience—and the movie does that too. After all, the film seems tailor-made to showcase how good-looking and tempting Edward is. His over-the-top, slow-motion, and dramatic entrance could be accompanied with subtitles reading, "Swoon now!"

While I think most fans will be happy with the film, I think the movie proves that books can sometimes get away with sappiness and clichés that movies don't; onscreen, they are pretty groan-worthy. Also, while the book captures girls' hearts, the movie's love story without Meyer's description is kinda mundane. Another issue with the change in medium is that a movie doesn't let one's imagination work as a book does.Meyer's fantastical narratives are very detailed and create great mental pictures.On screen, they sometimes can't compete with what's in your head.In one popular portion of the book, for example, Edward dramatically shows why vampires don't go in the sunlight.On the printed page, the description is thrilling. In the movie, flawed special effects make it look like he's just really sweaty.

These types of things won't impress new audiences the way the book grabbed readers. Like Hardwicke struggled with in The Nativity Story, her integration of the supernatural into the natural world can come off cheesy and overdone. Almost all the special effects (save for that great ending fight) are almost laughable—like the vampires' super speed, which looks more like what I call "Muppet Running." You know how when Kermit would walk, you could tell he was hung by wires and his legs didn't really hit the ground with each step? That's what happens here, defying the laws of physics. In addition, the make-up of the pale Cullen family can seem very caked on and fakey at times. Plus, the vampires are asked to say silly things like, "Hold on tight, spider monkey!"

Other than the bloodsuckers, the rest of the film is pretty good. The Pacific Northwest scenery is lush and beautiful. The characters are right out of the book—as is the soft humor and endearing relationships like that between Bella and her dad. And, for me, what holds the whole thing together is Kristen Stewart's performance as Bella. She grounds the movie and gives us genuine emotion and personality.

But as good as Stewart is, I think Pattinson (who was solid as Cedric in Harry Potter and the Goblet of Fire) as Edward was a casting mistake. Or maybe it was how he was directed. He's wooden and emotes with unchanging facial expression of brooding eyebrows, deep breathing, and body language that communicates that he really has to go to the bathroom. These scenes lead to unintentional laughter in even the most serious moments.

What Pattinson does do well, though, are the tender, loving moments with Stewart. This is maybe what the movie does best: quiet moments of intimacy—not sex, but more innocent intimacy like when the infatuated Bella and Edward lie in the grass with their hands barely touching, or when they share their first kiss. These are electric moments, but the rest of the film pales in comparison.

Twilight is rated PG -13 for some violence and a scene of sensuality. The violence is mostly contained to one sequence that is basically a special-effects-heavy fistfight where a young girl is viciously attacked and two men fight over her. There's a good bit of blood shown. In the blurry background of one scene, three "good" vampires jump a bad vampire and seemingly snap his neck; it's implied that he's dismembered and burned. There are two scenes of vampire bites, only one is graphic. The scene of sensuality is a passionate kiss between Edward and Bella on her bed. They eventually get very caught up in it, lie back on her bed, and then he leaps up as he gets too carried away with the kiss. Bella and Edward spend a night—fully clothed and on top of the covers—next to each other on her bed. A mother asks her daughter if she's "being safe" immediately after hearing there's a boy in the picture. The word hell and God's name are used as swear words a few times.