The first thing you need to know about Eagle Eye—the new techno-paranoid thriller starring Shia LaBeouf and directed by D.J. Caruso, who previously collaborated on last year's teenaged Rear Window wanna-be Disturbia—is that it is absolutely, completely preposterous. LaBeouf plays a young man named Jerry Shaw, whose life is hijacked one day when items show up at his apartment that make him seem like a terrorist, and he begins receiving mysterious phone calls from a woman whose directions for escaping the cops are perfectly timed to coincide with out-of-control cranes and moving trains. Even when Jerry loses his cell phone, the woman is able to reach him on another phone that happens to belong to a complete stranger.

But the movie is not simply preposterous because it lays out such an over-the-top vision of a world in which anyone with access to "the grid" can flawlessly manipulate an innocent man's life. The film is preposterous even on its own terms.

For one thing, the woman at the other end of the phone ends up manipulating things that she really shouldn't have any access to. (When high-voltage power lines begin falling from a tower, to punish someone down below, you wonder if the woman or her people placed remote-control detonators up there in advance, and how they knew where the person being punished would be standing.) Smart people who discover that "the grid" has been compromised make cell phone calls to warn each other anyway—calls that are immediately jammed, of course. And it turns out the woman has been pulling all these strings in the most contrived manner possible simply to kill certain people who really should have been a whole lot easier to reach. I mean, when the movie's villain can get a fighter ... 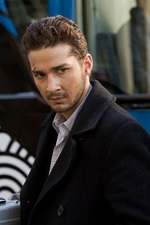