Kirk Cameron, best known as a teen idol in Growing Pains, has been in a lot of Christian movies lately—including Fireproof, from the makers of Facing the Giants.
by Peter T. Chattaway |September 24, 2008

Kirk Cameron may be best known as a former teen idol and as one of the stars of the 1980s sitcom Growing Pains. But over the past decade, he has been cultivating another, very different fan base, as the star of several Christian movies—including the Left Behind series and Miracle of the Cards—and as an evangelist with The Way of the Master, a ministry he shares with Ray Comfort.

Cameron, who turns 38 in October, became a Christian while still in his teens, and he has been married to the actress Chelsea Noble—who he met when she guest-starred on Growing Pains—since 1991. He recently published a book about his life and career, called Still Growing: An Autobiography (Regal).

Now he has a starring role in Fireproof, the new movie from church-based filmmakers Alex and Stephen Kendrick, who made the popular Facing the Giants a couple ago. In the new film, Cameron stars as a firefighter trying to save his marriage.

Cameron spoke to CT Movies by phone while promoting his book.

Did you approach the Kendricks about appearing in Fireproof, or did they approach you?

Cameron: I approached the Kendricks after seeing Facing the Giants and said, "You guys did such a great job on this little movie, if I can help you out with your next one, please let me know, I'd love to be a part of it." And through a series of events, I developed a friendship with the Kendricks, and after they had auditioned everyone they thought might be right for the role, they couldn't find anyone. Then they asked me if I would fly to Georgia and audition.

How did it feel, auditioning for something like this?

Cameron: I was really excited because I wanted to be a part of this movie. It was such an exciting story, and it was a tough audition. They made ... 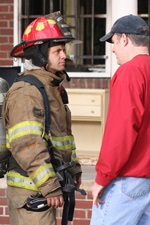