The smash Disney sitcom about an American teen and her pop star alter ego gets the big screen treatment, with tween-pleasing results.
Carolyn Arends|April 10, 2009
Our Rating

You've probably heard of Hannah Montana—and if you have a child under the age of 14, you may even have heard a bit too much. The smash Disney channel sitcom stars Miley Cyrus as Miley Stewart, a fun-loving American teen whose secret alter ego, Hannah Montana, just happens to be a global pop star. With the series in its third wildly successful season, Disney decided it was time to take Miley/Hannah to the big screen in a full-length feature. Hannah Montana The Movie is the tween-pleasing result.

When Hannah's Hollywood hijinks climax at a Beverly Hills boutique in a much-publicized catfight over a pair of shoes with Tyra Banks, Robby Ray decides some "Hannah Detox" is in order. He diverts his daughter's New York-bound jet and forces a return to the family homestead in Crowley Corners, Tennessee. There, an initially resentful Miley gradually rediscovers her roots, thanks to her horse, her grandmother, her guitar, and a hunky cowboy named Travis (Lucas Till).

Eventually, Miley finds such contentment away from the spotlight that Hannah's future becomes uncertain. Miley is contemplating saying goodbye to her pop star life, until the impending urbanization of idyllic Crowley Corners by a smarmy developer (Barry Bostwick) forces her hand. A "Save ... 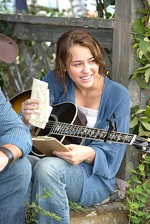