The Dardennes brothers' latest film is an intensely naturalistic tale of deception and desperation that retains the hallmarks of their celebrated body of work.
Alissa Wilkinson|July 31, 2009
Our Rating

Brothers Jean-Pierre and Luc Dardennes are among the most celebrated filmmakers working today. Known for their beautiful and intensely naturalistic portrayals of the lower end of the Belgian social spectrum, they entered the spotlight after La Promesse was released in 1996, and since then most of their films have played and won major honors at the prestigious Cannes Film Festival.

Their latest, Lorna's Silence (Le silence de Lorna), is a more accessible entry into the Dardennes canon. It unwinds slowly and unexpectedly, delivering its intrigue with a deadpan expression. But at the same time, it retains all the hallmarks of the brothers' work, in its storytelling, setting, characters, silence, and quiet shock.

In a previous Dardennes film, L'enfant, the main character (also played by Jérémie Renier, who plays one of the leads here) slowly moves beyond his childish narcissism to become aware of those around him. L'enfant is sad, but realistic in its portrayal of redemption: our actions have consequences, but they do not move us beyond hope.

In the same way, Lorna's Silence is a tale of redemption, though it is less obvious who or what is being redeemed. We encounter Lorna at her breaking point, long after she has made the decision to use another human being to suit her own desperate needs. An immigrant, Lorna, her boyfriend Sokol, and their shady cohort Fabio have cooked up a scam marriage plan to gain Belgian citizenship for Lorna and, in the process, earn a lot of money. Lorna and Sokol want a life together; Fabio wants the cash and connections; and their chosen prey needs them.

But that's all happened before the movie starts, and the details are unwound carefully, gradually, and with little fanfare. The narrative ... 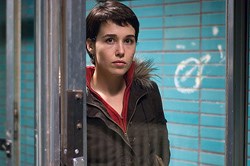