The Brothers Bloom is a joyful little movie that glories in the art of storytelling. It's a film that makes very clear that it is a fiction—a spectacularly embellished, bedazzled fiction with little recourse to reality but a huge debt to other stories, other movies, and other myths. Like his first feature, Brick, writer/director Rian Johnson's sophomore effort is a highly stylized, heady film that is deeply influenced by cinematic history and genre storytelling. But whereas Brick was a fast-talking film noir drama set in a contemporary suburban Los Angeles high school, The Brothers Bloom is a lavish caper film that mixes conventions of everything from James Bond to Ocean's 11, all with a stylistic flair and quirky optimism that evokes Wes Anderson. Appropriate given its self-reflexive palette, the film's thematic center is the idea that life and narrative are one and the same—that we are all living out our own stories. We are spinning our own narratives. "There's no such thing as an unwritten life," says one character. "Only a badly written one."

The Brothers Bloom are a pair of con men brothers, who you would think share the last name of "Bloom." But as it turns out, "Bloom" is simply the younger brother's first name (played by Adrien Brody). Older brother is named Stephen (Mark Ruffalo), and he calls all the shots. The film opens with a charming sequence of the brothers as little boys, wearing matching bowler hats and Chaplin-esque white shirts and black coats (their fashion coordination continues throughout the film). As elementary-age swindlers hatching their first elaborate plot to con their classmates out of lunch money, we immediately get a sense of the brothers' relationship and their respective characters. ... 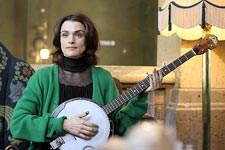