With Disney's A Christmas Carol opening this week, we're reminded of the man behind the studio, a religious and praying man who oft included biblical themes in his films.
Eric David|November 4, 2009

When Disney's A Christmas Carol opens in theaters this week, the Man Behind the Mouse will be up on the marquee yet again, bringing rich—and usually family-friendly—fare to the big screen.

Walt Disney needs no introduction. Born in 1901, he was named after his father's friend, their family's Congregationalist pastor Walter Parr. His father, Elias Disney, was very strict and would beat his children for minor violations of the Sabbath. Interestingly, Walt and his sister snuck out once to see an early silent film projected on a sheet in a church: of Jesus being crucified and resurrected, most likely the 1912 classic From the Manger to the Cross.

Infatuated with vaudeville and motion pictures, Disney began to draw cartoons for his school papers. After driving an ambulance in World War I, he returned to the States and tried to break into the fledgling animated film industry. After some false starts animating shorts with a few stock characters which he had created, he struck gold in 1928 by creating Mickey Mouse, voiced by the man himself, and the rest is history: Mickey Mouse is one of the most recognized icons in the world. Tony Campolo called Mickey "Adam before the fall. He's a purely innocent creature. And he's never done anything sinful in his life. … Look at the fifth chapter of Galatians, where Paul talks about the fruits of the Holy Spirit. They are these: love and joy and peace and patience. All of these godly virtues are wrapped up in Mickey and his followers."

Ion 1949, Disney wrote in Guideposts magazine: "I believe firmly in the efficacy of religion, in its powerful influence on a person's whole life. It helps immeasurably to meet the storm and stress of life and keep you attuned to the Divine inspiration. ... 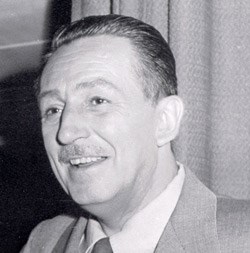