Sara Groves turns in her most self-revelatory album yet, opening up about everything from marital spats to anxiety attacks to the notion of 'confessional living.'
Andrea Bailey Willits|November 17, 2009

When Sara Groves sings, you know she's about to speak truth—about life, faith, and herself. On her ninth album, Fireflies and Songs, the acclaimed songwriter further demonstrates what she calls "confessional living" in hopes that others will do the same. Groves talked to CT about her new album, her challenges, her courage to confess—and what her husband thinks about unveiling their marriage to the world.

You're well known for your songwriting, yet you've said Fireflies and Songs is "your songwriter's album." What's new this time?

I've been writing about justice, the Kingdom of God, observing external things for the last three albums. So what I meant by that is that this time, I'm writing about myself. I just turned the spotlight inward. [INO Records president] Jeff Moseley basically said, "It feels like a long time since we've heard what it's like to be you—a wife, friend, child of God at 37." I'd made a very conscious departure from talking about myself after All Right Here and a little bit after Other Side of Something because I felt like I was growing in that way, like it's not all about me and my introspective thoughts; it has to be about something bigger. I did write about bigger things, but I felt permission, I guess, to come back home.

I have to say that when I knew that's where I was headed, it made me tired (laughs). It's a lot easier to write about external things than to dig in the dirt again. And I wasn't sure how transparent I wanted to be. I decided to pretty much disclose a lot; I wanted it to sound very confessional. It felt like I was working out some muscles that I hadn't worked out in a while as a songwriter.

What gave you the courage to confess to the world in these songs?

I had a conversation ... 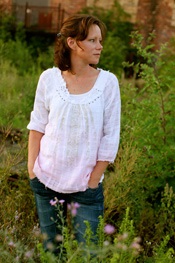