The press called her a "lady pilot," but Amelia Earhart called herself a "tramp flyer." She seems to have preferred "flyer" to "pilot"; perhaps it was just a manner of speech, or perhaps it was the sky she cared about more than the airplane, the act of flying rather than the mechanics of manning an aircraft. The other word she liked was "vagabonding." As imagined in Amelia, Mira Nair's handsome biopic, Earhart craves freedom above all: "no borders, only horizons."

I came away from Amelia wanting to read the books on which it professes to be based, Susan Butler's East to the Dawn and Mary S. Lovell's The Sound of Wings. Mission accomplished? Yes and no. To the extent that the film elevates Earhart's profile and sends curious viewers to biographies and websites to learn more, Nair and company, and Earhart advocates generally, may be pleased.

Will the film itself please Earhart fans? Hard to say. Amelia piques my curiosity more than it satisfies it. Not knowing much about Earhart, I'm surprised at how little the film surprised me. I want to read the books to find the surprises the movie left out. I found the movie a decent enough take, though I suspect the film may be subject to a law of inverse relationship of knowledge to enjoyment: The more you know about Earhart, the less satisfied you may be with the film.

But it's worth seeing, perhaps, just to see Hilary Swank as Earhart. It seems incomprehensible that Amelia is the first big-screen biopic of the pioneering feminist aviator, but the very idea of Swank as Earhart is so obviously right that it's hard to imagine anyone else carrying an Earhart biopic. (I haven't seen the 1994 TV movie starring Diane Keaton, but looks aside, Keaton seems all wrong. Incidentally, Amy Adams did ... 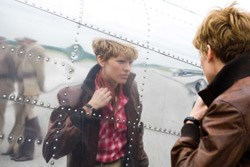