Nearly 60 years after his debut in Japan, the teen robotic superhero finally gets a big-screen computer-animated feature with predictable but pleasing results.
Russ Breimeier|October 23, 2009
Our Rating

As versed as I am in cartoons, comics, and superhero lore, the character of Astro Boy has managed to fly under my radar all these years. I'm not alone: despite becoming a hot commodity in Japan and the rest of the world, Astro Boy never gained much of a following in America—and after watching some of the lame old episodes from the '60s and '80s, I can see why. (The original cartoon pioneered kitschy Japanese anime, but it's all still substandard and juvenile, whether we're talking the '60s, '80s, or '90s.)

Unlike 2008's Speed Racer, Astro Boy successfully reintroduces its hero to a new generation—no small feat considering that he first appeared in Japanese manga in 1951. He now seems anything but dated in this computer-animated feature that may be a step below Pixar, but ahead of most other second- and third-rate animated movies these days.

The film focuses on Astro Boy's origins in Metro City, a futuristic world populated by humans and robots, hovering above an over-polluted Earth. Robotic technology expert Dr. Tenma (voiced by Nicolas Cage), along with Dr. Elefun (Bill Nighy), is on the verge of a scientific breakthrough to harness the energy of a star. But tragedy strikes during their presentation for President Stone (Donald Sutherland) when the experiment leads to the death of Tenma's 13-year-old son Toby (Freddie Highmore).

The distraught Tenma uses his skills to recreate Toby as a robot, complete with Toby's memories, personality, and the latest in state-of-the-art defense systems. Yet as lifelike as the robot is, Tenma realizes it can't replace his son and believes he's made a mistake. But before he can be shut down by his father and the crazed President Stone, who wishes to harness the robot's energy source ... 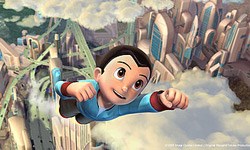