A beautifully stylized, superbly acted tale about the choice between book smarts or the school of life.
Camerin Courtney|October 9, 2009
Our Rating

It's a sign of the times that the May-December relationship at the center of An Education is unique. Why unique? Because May is the woman and December is the man. How romantically retro and almost refreshing in this age of cougarism. Of course, we have to flash back to 1961 in a London suburb to find this bit of rom-dram history. But it's a mostly delightful walk down memory lane.

Our May is Jenny (Carey Mulligan), a 16-year-old student at an all-girls prep school. She's bright and bored under the watchful eye of her overprotective and driven dad. As she listens to smuggled jazz records in her bedroom, Jenny is just itching to get on with her life—mirroring the culture around her just recovering from the depression of war and teetering on the brink of the decadent '60s.

December is David (Peter Sarsgaard), the 30something man who rescues Jenny and her cello from a rainy walk home after orchestra practice. Though Jenny is reluctant to get into a car with a complete stranger, David slowly charms her into the dry sanctuary of his roadster's passenger seat.

Over the following weeks, he slowly charms his way into Jenny's heart as well. With bouquets of flowers, expensive meals in smoky clubs, and trips to the opera, David provides that larger life, that something more Jenny has been craving. Along the way, David always has his handsome business partner, Danny (Dominic Cooper), and Danny's beautiful but vacuous girlfriend, Helen (Rosamund Pike), in tow—providing not just a relationship, but a community for Jenny to belong to. And Helen is more than happy to make over Jenny from a generic schoolgirl into an Audrey-Hepburn-esque knockout. It's as if Helen has a new pet.

While wooing Jenny is relatively easy, it's charming ... 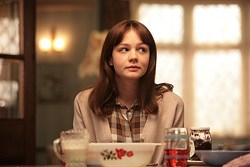