Kidman, Eckhart give stellar performances in a quiet tale of grief and (perhaps) healing.
Steven D. Greydanus|December 16, 2010
Our Rating

As a nurse in a pediatric cardiac intensive care unit, my wife Suz watched couples not unlike this film's Becca and Howie (Nicole Kidman and Aaron Eckhart) in a particular sort of crisis: not the crisis of a sharp, sudden catastrophe, but a long, numbing slog through a seemingly endless twilight between agony and normality. Sometimes there's a sudden calamity at the beginning, or the slog might be punctuated by new crisis—a new operation, a downturn, death—and in the throes of trauma the flickerings of normality are extinguished. But one can't live long in that state of trauma. The crushing darkness yields imperceptibly to a Cimmerian gloom.

Not infrequently, the couple find their way through the gloom at different rates, or in different directions. A sharp moment of suffering draws them together, but in the long slog it's not uncommon for them to drift apart. They suffer and grieve, but they grieve differently. One spouse (more often the wife) may be wholly consumed by the crisis, while the other (more often the husband) feels that their relationship (or he himself, or their family) is being neglected. Divorce is a common hazard for couples who lose or almost lose a child.

It's indicative of the muddle of life in the shadow of crisis that critics seem divided on whether to focus on the poignancy or the humor of Rabbit Hole. "Grief may be the topic under examination," one writes, "but humor—incisive, observant and warm—is the tool with which it's dissected." Another goes so far as to call the film "a dryly un-sentimental black comedy." It's not that, but Rabbit Hole knows that sentiment and unsentimentality are very different and even incompatible drugs to which different people turn to help them cope ... 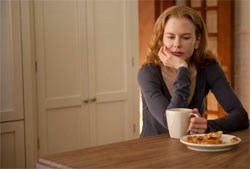