Somewhere, the new film from writer-director Sofia Coppola, begins, ironically, in the middle of nowhere: a desert dotted by a few cacti and a paved racetrack of mysterious origins. We hear and see nothing. Then the lazy drone of an engine emerges from screen left, portending a Ferrari idling around the track. Where is it from? Where is it going? The vehicle continues on its circuitous path, moving in and out of our sight at a surprisingly slow pace. Suddenly its driver stops and emerges from his den, a scruffy 30-something wearing untied boots and black shades. He stares at his lifeless, sun-scorched surroundings without moving a muscle. He continues to stare.

The little Ferrari symbolizes its driver, Johnny Marco, a bad-boy, B-grade actor played convincingly by bad-boy, (mostly) B-grade actor Stephen Dorff. Somewhere, which won the Golden Lion award at the Venice Film Festival, is Coppola's subtle character study of a man who is barely a character. The privileged son of Hollywood parents, Johnny has cruised through life without challenge or lack of choice. A smorgasbord of beer and cigarettes and women are ever before him in dizzying variety, awaiting his consumption between stints in trite action flicks. The gospel according to Epicurus would seem to have Johnny moving along at a pleasant pace. We soon see, however, that it has left him dead.

At 39, the Oscar-winning Coppola has developed a keen eye for quirky, true-to-life characters and details, as shown by her previous films—The Virgin Suicides (1999), Lost in Translation (2003), and Marie Antoinette (2006). Her newest, its themes of loneliness and surprise connection reminiscent of Lost in Translation, unfolds less as a plot than as a collection of quiet vignettes. ... 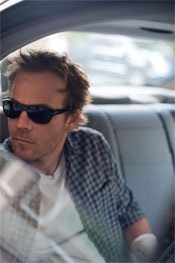