David O. Russell's latest delivers a knockout blow in one of the best films of the year.
Alissa Wilkinson|December 10, 2010
Our Rating

You could call The Fighter a boxing movie. You might say it's a heartfelt story about a working-class family, or a retelling of the age-old rivalry between brothers. You could call it a gritty, darkly funny story of hitting the bottom and being redeemed. Lazily, you might recycle film critic clichés and talk about the "triumph of the human spirit."

All true. But also inadequate for The Fighter. It's not quite like anything I've seen before, and yet, there's nothing self-conscious about it. Based on a true story, it has all the elements of a standard sports movie or family drama or love story, done to perfection: excellent performances—particularly Christian Bale and Melissa Leo—with a spot-on supporting cast, ringing dialogue peppered with humor and heartbreak, a good soundtrack, and some great, stirring fight scenes. To describe it makes it sound like an inspirational tale about a working-class man who overcomes his own demons when the odds are stacked against him, but it manages to be more than the sum of its parts.

The Fighter is a tale of two brothers: Years ago, Dicky Ecklund (Bale) fought Sugar Ray Leonard (Ecklund knocked Leonard down, but lost the fight), and garnered the title "The Pride of Lowell." He's not just the pride of working-class Lowell, Massachussetts: he's the apple of his mother's eye, the prized older brother in a loud, loving clan. Gaunt, gregarious, and prone to trouble, he's the polar opposite of his younger half-brother, Micky Ward (Mark Wahlberg)—also a boxer, but thoughtful, quiet, serious. Dicky shouts and smokes and jumps from windows; Micky sits quietly amongst the gaggle of his sisters at the local bar and watches Charlene (Amy Adams), the pretty barmaid, until he works up the courage to ask her to dinner and a movie. 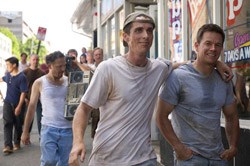 Christian Bale and Mark Wahlberg as half-brothers Dicky and Micky

Both boys are managed by Alice (Leo), their feisty mother hen who's not afraid of anyone who might get in the way of her boys' success—especially Dicky's. Micky's been training for fights with Dicky—or, more or less with Dicky, who tends to show up three hours late and can't remember to show up to catch planes—but he keeps getting beat in the ring. After a particularly brutal fight against a bigger opponent, Micky thinks about giving the whole thing up. But Charlene—who has a fierce will, an unshakeable faith in Micky, and a fairly effective right hook of her own—prods and encourages him to pursue better, more reliable training and a manager who will book him into evenly-matched fights.

What Charlene can see is that the whole Ward/Ecklund clan—including Dicky and Micky—is so wrapped up in the memory of Dicky's glory days that Micky's training and success is a bit of an afterthought. Yet as Dicky falls into trouble that is broadcast throughout the community, Micky has to make difficult decisions: will he loyally stick with Dicky and Alice and throw his career away, or abandon them for a better trainer and a shot at success? 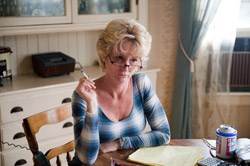 Melissa Leo as the mom and manager

David O. Russell (Three Kings, I Heart Huckabees) is at the top of his game, simultaneously making us work to keep up and grabbing us by the heart within moments and not letting go—the movie is two hours long, but it's over much too soon. We've got so much invested in these people that by the time the pivotal fight rolls around, we're right in Micky's corner with everyone else, ready to shout instructions, cover our eyes, weep and holler and jump.

Russell's film bobs and weaves, dodges and dances and hits just enough to keep us from relying on the formulas lesser sports movies have taught us. Everyone's grip on the truth is slightly cockeyed, so we're always wondering what's true, too. Dicky appears to be a dead weight on his brother—but we start to suspect he knows what he's talking about. Does Micky actually have any talent? Is Alice neglecting her younger son—or does she know exactly what both boys need? 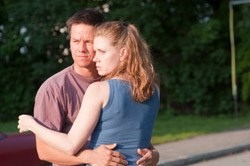 Yet, in stark contrast to basically every "sports movie" you've ever seen, The Fighter never manipulates us or tells us how to feel through passionate speeches or excessive montages. The fights are kept to a lean minimum, and there are no tearful apology scenes. No: the story, the acting, and the deep truths here speak for themselves.

A lesser movie—and, probably, one not based so firmly on real people—would have had Micky rising above his family and ascending to titles and glory because he needed to "find his own path" in life and make a name for himself. Then his family would come to him and ask for forgiveness for the way they treated him. 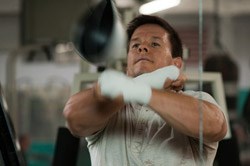 But The Fighter is a better movie than that—probably one of the best films you'll see all year—and so nothing of the sort happens. Micky must instead apologize and fight to get everyone he loves in his corner. In a true reflection of the tension between fulfilling individual potential well while still existing within family and community, Micky's work—boxing—becomes a way to seek redemption for himself and his community. It's a way to win for not just him and Charlene, or even for his trainer, but because he sees himself embedded into the fabric of his family—and Lowell itself.

The Fighter is rated R for language, drug content, some violence, and sexuality. In a few scenes, characters smoke crack. The language is rough, as befits the sort of neighborhood in which the film takes place. In one scene, Charlene is in transparent lingerie, and there's some passing talk of deviant sexual behavior. There's a lot of fighting, of course—in the ring and out of it, including some police brutality—but blood is kept to a minimum, and mostly in actual matches.