Its brutal content is not for all tastes, but this thoughtful action movie finds Denzel Washington protecting the last copy of a very important book: the Bible.
Russ Breimeier|January 15, 2010
Our Rating

The Book of Eli continues Hollywood's obsession with post-apocalyptic tales, and in many ways feels like it belongs in the same world as The Road with its ash-laden wastelands and crazed cannibals roaming about. But the comparisons end there. Where The Road is a thoughtful art film based on a Pulitzer prize-winning novel, Eli is more of a popcorn action flick influenced by the visual style of graphic novels, although it's more thought-provoking and less of an adrenaline rush than the Mad Max movies.

Denzel Washington stars as Eli, a lone traveler wandering America's wastelands presumably devastated by nuclear war 30 years prior. The stark landscape is littered with abandoned cars, crumbling buildings, bombed highways, and the occasional picked-clean body. Water and food are scarce, purchased through trade of whatever you happen to be carrying—wet wipes are humorously and understandably one of the hot commodities. 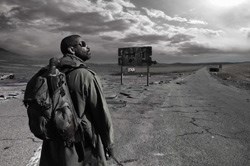 Denzel Washington as Eli, a man on a mission from God

Heading west for reasons that only become clear later, Eli happens upon a desert town run by Carnegie (Gary Oldman, returning to his psychotic baddie roots) and his gang of violent lowlifes. The crime boss is looking to expand his territory and knows that knowledge is power in a world where most people don't know how to read. His gang searches the area (and hapless travelers) for books to help him gain control. There's one in particular he's desperate to find, a book with the power to rally people under his leadership—and Eli just happens to have the world's last remaining copy.

Yes, that book is the Bible. King James Version, at that. As recounted by Carnegie and Eli, Bibles are scarce due to a large-scale book burning after the fallout—many irrationally blamed Christianity as a cause of the war.

Eli and Carnegie want the Scriptures for very different reasons. Carnegie recognizes that the Bible can influence people's hearts and minds—a "weapon" to bend people's wills to his own. But Eli believes he is on a mission from God, following the instructions of the "still small voice" within to protect the holy book at all costs and save his devastated world with the divine wisdom it contains. These differences in philosophy lead to some shootouts and pursuits across the wastelands as Eli desperately continues his westward quest. Meanwhile, Carnegie's sympathetic stepdaughter Solara (Mila Kunis), joins Eli on his trek, with Carnegie's gang hot on their trail. 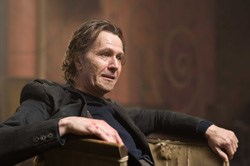 Who is Eli? That's the million-dollar question driving this movie. Is he a prophet with a mission? Yes, to an extent, and perhaps a bit of a biblical judge too. He's regularly shown in prayer, daily reading his Bible, and very good at quoting Scripture. Thankfully, he's not revealed to be Jesus in his Second Coming, though it's easy to wonder if that's where the movie is headed since Eli has magnetic sway over some characters, is seemingly impervious to bullets in one scene, and has an almost supernatural way of exacting bloody judgment on his enemies.

At the same time, Eli doesn't always assist people when he can—and admits as much later in the film. In one scene, instead of helping fellow travelers attacked by a gang, he repeatedly tells himself, "Stay on the path. This is not your concern." So is he really a holy man in humble service to the Lord, or is he blindly guided by a warped, selfish version of faith? I reluctantly believe the movie justifies Eli's actions (and inactions) given the context of his world; others will disagree.

The film's violence will be a stumbling block for some. The movie is driven more by dialogue than action, but it's quite violent when it wants to be. Eli is skilled with the machete, the bow, and general firearms in protecting himself and his book. (Check out The Family Corner below for more details.) This is bound to stir arguments. Eli is a violent Christian, but he lives in a violent world. Still, even if he's on a holy quest, does he have to defend himself (and the Bible) so coldly? Can the violence of his self-defense be reconciled with the Christian message of love and service? Let the debate begin. 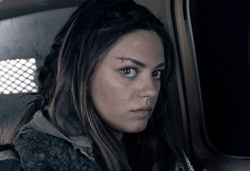 Discerning filmgoers will also wince at the harsh realities of Eli's post-apocalyptic world. Prostitution and cannibalism are referenced, but never shown. Rape is attempted in one scene and horrifically implied in another, though again there's nothing graphically depicted. And there's lots of profanity.

While such content is not for everyone, it doesn't negate the film's positive message or its entertainment potential. In spite of the brutal violence, I found The Book of Eli much easier to stomach than the bleak realities and emotional hardships of The Road. This film is more of a crowd-pleaser in tone—a gritty comic book rather than a grim drama. Washington remains an engaging actor, there are moments of humor, and though the action isn't first-rate or groundbreaking, it's still often exciting.

It's directed by the Hughes Brothers, best known for 1993's Menace II Society and last seen behind 2001's Jack-the-Ripper thriller From Hell. Here again they demonstrate a flair for interesting visuals, swooping cameras, and tightly cut action. Interesting that this is the project that finally draws them out of semi-retirement.

Don't mess with Denzel. Don't even think about it.

There's also something to be said for an action movie driven by ideas instead of the other way around, especially since there are at least 15 minutes of movie after the final action scene. The ending has a couple of clever twists that some have already complained are preposterous. But I enjoyed them; they involve the sort of things Christians will enthusiastically embrace.

Some will consider the film B-movie trash. Others will say it's an action movie of above-average intelligence. Some will say there's too much filth to wade through to appreciate the presence of the Bible; others will note that despite the objectionable material, it's a Hollywood action movie that, remarkably, puts God's power on display and allows his Word to prevail. And while there's a degree of reverence toward God's Word and general Christian practices, Christ himself isn't really referenced.

Still, we can share amazement that Hollywood has released a mainstream action movie about the Bible. If The Book of Eli succeeds in sparking public discussion about faith and the vitality of God's Word, that's cause for acclaim.

The Book of Eli is rated R for some brutal violence and language, though the MPAA may as well have dropped the word "some." Profanity is plentiful, including several f-bombs, and there's a lot of violence. Eli wields a machete to lop off hands and heads, uses firearms to blow away lots of bad guys, and fires arrows through the necks and crotches of would-be rapists. Rape is implied and attempted, though never really shown. Prostitution and cannibalism are referenced, but never shown.

1 of 4
Denzel Washington as Eli, a man on a mission from GodGary Oldman as CarnegieMila Kunis as SolaraDon't mess with Denzel. Don't even think about it.