He has donned prosthetics for Hellboy and Pan's Labyrinth, and will again as Frankenstein. With a cameo in Legion, Doug Jones talks about his work—and his faith.
Mark Moring|January 19, 2010

You've probably seen Doug Jones in a movie before, but likely not the real thing. That's because he's often hidden beneath prosthetics and make-up—as Abe Sapien in the Hellboy movies, the Silver Surfer in the Fantastic 4 sequel, and both the Faun and Pale Man in the Oscar-winning Pan's Labyrinth.

Guillermo del Toro, who directed both Hellboy films and Pan's Labyrinth, has signed Jones to play the title character for a 2012 remake of Frankenstein, and rumor has it that Jones will be in del Toro's The Hobbit, releasing in two parts in 2011 and 2012.

You'll briefly see more of the real Jones in Legion, a supernatural thriller opening Friday. He only has about 90 seconds of screen time, but as the creepy Ice Cream Man, you'll see his real face—until it contorts into something quite gruesome.

Legion is a wild story in which God, fed up with mankind, sends a legion of angels to wipe out the human race, whose only hope lies in a group of strangers trapped in an out-of-the way diner—and in the Archangel Michael, who comes to their aid. Jones, a Christian, knows it's bad theology, but agreed to the gig because its director, Scott Stewart, wanted Jones to be a primary spokesman in promoting the film. Jones saw that as an opportunity to talk to others about God's real plan for mankind.

We talked with Jones about the film, his other roles, and what it's like to mainly be known as the man behind the mask.

Why did you agree to be in a movie that's theologically incorrect?

I was very uneasy about God being the bad guy, but they wanted to use my face and name to help promote the film. Then it became more important to me.

Scott Stewart, the director, is Jewish, and I told him I'm a Christian. When he said this was kind of a mirror ... 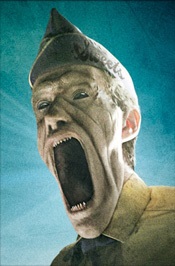