Martin Campbell directed a little movie called Casino Royale—perhaps you've heard of it?—and it turned out to be a big enough hit that the powers-that-be gave him a bit of creative wiggle room for his next project, allowing him to break out of the 007 franchise and make the movie he really wanted to make. I say good for Campbell; his Casino was, for my money, easily the most stylish of the Bond movies, but also the one with the most heart.

His well-deserved "vanity project," though, turns out to be no vanity project at all. Edge of Darkness is adapted from an earlier BBC miniseries, which Campbell directed in 1985. Clearly, the material resonates with him. And it's likely to resonate with moviegoers, too; Edge of Darkness is not an art project or an auteur's labor of love so much as it's a flat-out thriller, and it certainly doesn't scrimp on style. As for the heart? Well, it certainly tries—maybe a little too hard, in fact.

Of course, the other big story is that this is Mel Gibson's first starring role since Signs, nearly eight years ago, but it actually turns out to be a fairly low-key comeback for Gibson: He's played roles similar to this, he delivers a performance that is basically a twist on his brooding work in Signs, and there's only one passing reference to his more recent off-camera persona, a metaphor in which he invokes Jesus on the cross. It's solid work, but flashy it ain't.

And actually, that's a good way to describe the movie as a whole—a stylish but low-key film that splits the difference between a throwback thriller and a modern-day noir. Gibson plays Boston detective Thomas Craven, who at the film's beginning is excited to have his grown daughter Emma (Bojana Novakovic) take some time ... 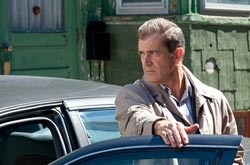