The archangel Michael is the only thing standing between God's wrath and mankind's extermination in this nonsensical abomination of a film.
Russ Breimeier|January 22, 2010
Our Rating

Legion redefines the "disaster movie," though not in the apocalyptic sense that director Scott Stewart intended.

The film is a confused mess of ideas reminiscent of The Prophecy, The Matrix, and the standard horror/action standoff depicted in virtually every zombie movie. Oddly enough, Stewart steals most heavily from The Terminator, in both story and imagery. (James Cameron ought to sue concerning the desert highway shots with the voiceovers.)

Whatever. Legion is a rip-off any way you slice it, and not just because the action and core storyline are both so derivative. The plot is ultimately nonsensical, the questions it raises are never answered, and a recap of the details should be enough to turn off any Christian with half a brain—though attempting to summarize the story is good enough for some laughs. That's because Legion pretends to be about spiritual/apocalyptic warfare, but ultimately depicts nothing more than the confused cynicism of the filmmakers.

In Legion, God has given up on mankind … again. Why? The movie never specifies beyond generic references to mankind's propensity for hatred, racism, and war. One character says it's because God is "sick of all the [BS]." That's apparently a brilliant enough answer for Stewart (who co-wrote) to use in the movie twice.

As the film points out, God used a flood to destroy humanity last time. Now the extermination is to be carried out by the angels, his "dogs of heaven." Golly, you'd think God would be more efficient than that and do it himself, right? Why not use a global catastrophe like the one depicted in 2012?

All right, angels it is—because they look cool. Except one of them, Michael (Paul Bettany), still has faith and love for mankind—according ... 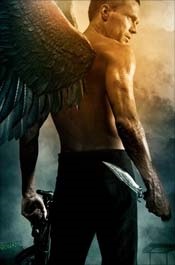