Robert Duvall is terrific in this Flannery O'Connor-esque Southern folk tale, playing an eccentric hermit who wants to hold his own funeral—'before' he dies.
Alissa Wilkinson|July 30, 2010
Our Rating

Some movies are great because of clever writing, flashy effects, or knockout acting. But others draw their appeal from understatement. Such is the great strength of Get Low, which, though drawn from a true story, could just have easily been pulled from a Flannery O'Connor tale about sin and guilt—and a Southern town's strangest character.

In 1930s Tennessee, legends abound about Felix Bush (Robert Duvall; our interview), the hermit who lives in a one-room log cabin at the edge of the woods. He's been withdrawn from society for so long that he hasn't really spoken to anyone in years. Small boys dare one another to go near his home. Townsfolk tell of his dark past, and his appearance—old clothing, long beard, and fierce look—only adds to the mystery and fear.

But one day Felix shows up in town with a wad of cash and finds the preacher. "It's time to get low," he tells him—time to settle the score and ready himself for his final days. He wants to plan his funeral, but it won't be just any funeral. He wants everyone in town to attend the "funeral party" and tell their stories about him. Unsure of Felix's spiritual state, the minister refuses to participate. 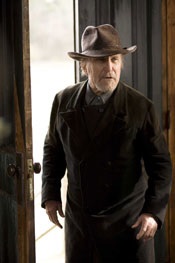 But Buddy (Lucas Black) overhears. He's just begun working for Frank Quinn (a weirdly but well-cast Bill Murray), a new man in town running the local funeral home that is, inexplicably, not getting much business. Buddy grew up locally and has heard the tales about Felix, but they need the business, so he and Frank venture into the woods to offer their services to Felix.

Felix's funeral party grows to epic proportions, the event of the season for the small town. But a chance encounter with an old friend, Mattie Darrow (Sissy Spacek), reminds Felix of his own dark past. And he'll need to confront it—much to Frank's chagrin—before he's ready to "get low."

Felix's tale is all about guilt, love, anger, and redemption. As the preacher tells Felix that forgiveness is freely available to those who ask, Felix refuses—he can't forgive himself for what he did, and he doesn't want God's forgiveness either. Yet, after decades hidden away in the forest, Felix still seeks redemption from his fellow man. 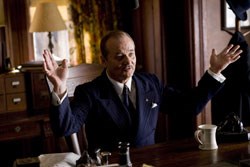 Director Aaron Schneider has made his career as a cinematographer, and in Get Low, the camera helps tell the story through framings that occasionally feel like paintings. It's the film's cast that carries the story, though. Duvall is simply marvelous, allowed to expand and humanize Felix into a man haunted by his wrongdoing all his life. His grunts and sighs say much more than words. Murray is an unexpected but inspired pick for this part, keeping his usual funny-man goofiness under wraps enough to have a soul. 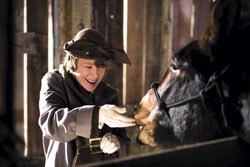 The great cast helps to counteract the film's weakness: its underdeveloped characters. The old maxim for writers is "show, don't tell," and while film is an inherently "showing" medium, this one still does too much telling. The townspeople despise Felix Bush, and we never actually see much behavior to support the idea. Felix actually seems like kind of a nice guy—a bit gruff, but pitiable. Frank Quinn is supposedly quite a rascal—maybe even a con man—but he seems to just like a big paycheck. The story works because of the actors, but it's too bad they haven't been given more to work with.

Despite its flaws, Get Low is a fine example of excellent filmmaking on a modest budget. Its story sticks with you after the credits roll, a testament to the power of a good tale simply told on the big screen.

Get Low is rated PG-13 for some thematic material and brief violent content. A man runs from a burning house. Felix tries to scare some kids with his gun. Most of the remaining thematic material deals with the main story, which is partly about adultery, though no sex or nudity is shown. However, it's a simply told tale, and not sensational.