Christopher Nolan's highly anticipated sci-fi action thriller is a brilliant and brainy masterpiece that demands to be seen again ... and again.
Steven D. Greydanus|July 16, 2010
Our Rating

A day or two after seeing Christopher Nolan's much-anticipated Inception, my head's still reeling. I don't think it will stop until I see it again. Once is not enough.

One thing I'm confident of: Inception is the most audacious and multifaceted Hollywood entertainment for grown-ups I've seen in years: a brainy, bravura achievement inviting comparison to the most inspired work of Hollywood visionaries from Michael Mann and Charlie Kaufman to Ridley Scott and the Wachowskis.

Some spoiler-free first impressions. One of the film's most iconic images starts with two characters sitting at a cafe in a Paris street market. One of them has an epiphany, and the next thing you know the whole street starts to explode—not like a bomb site, but like fireworks and confetti, with flying chunks of vendor wares and debris hanging in mid-air and bursting anew until every square foot of space around the characters is strewn with suspended fragments of stuff, like a snow globe. The shot, which took weeks of preparation and testing, is a mirror image of the film itself, meticulously controlled despite a superficial impression of chaos, exploding in all directions at once, bursting with creative ambition.

Like an even more spectacular set piece in which an entire Paris neighborhood folds over on itself, the film's narrative doubles down on itself three, four, even five times, with reality and unreality in layer under layer, like catacombs. On the surface, Inception is a glossy sci-fi caper film, an ambitious, mind-bending action thriller about an elite team of identity thieves hacking into a target's subconscious mind through shared dreams—the ultimate in identity theft. 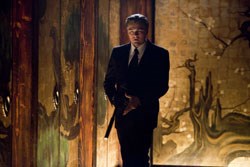