The classic children's books come to life as Ramona tries her best to keep the Quimby family afloat.
Laura Leonard|July 23, 2010
Our Rating

Ramona Quimby, as she explains in the opening voiceover, is "not a pest. I just have an overactive imagination." That imagination not only makes her everyday adventures much more interesting; it also helps her deal with some pretty big changes in her family. After all, "if you can't be brave at recess," she asks, "how can you be brave when it really counts?" Nine-year-old Ramona (perfectly cast Joey King), introduced to the world in the eponymous children's book series by Beverly Cleary, has to brave some pretty tough stuff; she feels pressure at home and at school to grow up, and she takes it upon herself to save the family home.

Little flourishes remind fans of the book that this is Ramona as she has always been: she stomps around Glenwood School in her red boots, flourishes her Qs with whiskers and a tail, and can't resist springing prissy Susan's "boing-boing" curls. But this is also Ramona for the recession generation: early in the movie, her father (John Corbett) loses his job and must become a stay-at-home Dad on the same day a team of construction workers have begun a new addition, turning the stuff of a nine-year-old's dreams—a hole in her very own house!—into a family crisis. At the same time, her favorite aunt, Bea (Ginnifer Goodwin), finds herself distracted by the return of her high school boyfriend Hobart (Josh Duhamel) who is determined to win her back. And on top of that, her older sister Beezus (Selena Gomez, Disney's tween queen of the moment) is growing up, getting her own room and her first real crush on a boy. The plot elements are pieced together from a variety of Cleary's Ramona books, with the majority coming from 1977's Ramona and Her Father. But unlike the books, the film is less about ... 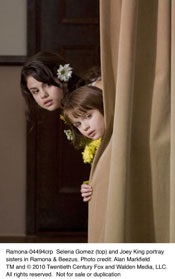