A rewarding tale of survival, not for the faint of heart.
Brett McCracken|November 5, 2010
Our Rating

127 Hours features one of the most brutally graphic scenes of violence I've ever seen on screen. But unlike the many films these days (the Saws and Hostels, etc.) for which such scenes are commonplace, 127 Hours uses the extreme depiction not to underscore the depravity of man, but to viscerally communicate the preciousness of life and the perseverance of hope. The result is a film about the extremes of life that, for the viewer, feels like running a marathon or climbing a mountain: an experience that is excruciatingly painful and yet supremely cathartic.

The film recounts the true story of Aron Ralston (James Franco), a hiker whose solo excursion in Utah's Canyonlands National Park turned horrifying when he fell into a crevice and had his lower right arm hand pinned by an immovable fallen boulder. For 127 hours, Ralston did everything he could to escape his predicament, all while watching his water supply diminish and his chances of rescue fade. Facing imminent death, Ralston resorted to the only remaining option for survival—severing his own arm to free himself from the boulder.

Everyone who goes in to this movie will know that scene is coming, and the film moves toward it with ominous anticipation. From the film's opening montage—where we see Aron packing for his hiking trip and accidentally forgetting his Swiss Army knife—we know that a brutal amputation scene awaits. But even though we might know the story and how it ends, director Danny Boyle (Slumdog Millionaire, Millions) tells it in an utterly invigorating way. Full of a sort of X-Games kinetic energy interspersed with poetic, ruminative quietness, 127 Hours is an exhilarating thrill ride of a movie that takes us inside the mind of a man who, up ... 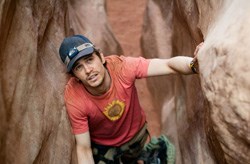